The sparrow that flew into an exposition center in Leeuwarden, The Netherlands, obviously had no idea that humans inside were in the process of setting up 4.1 million dominoes in an attempt to break a world record. (Humans do things like that, and animals have never understood it.) The sparrow hit one of the dominoes, and about 23,000 of the dominoes fell over before built-in “firebreaks” kicked in to stop all 4 million going down. Apparently furious that the bird had interfered, the humans called in an exterminator, who chased the bird down and executed it with an air rifle.

He apparently did not know that the common house sparrow is on the Dutch list of endangered species. The next day, the Dutch animal protection agency demanded prosecution for the bird’s killers. “Under Dutch law, you need a permit to kill this kind of bird,” said a spokesman, “and a permit can only be granted when there’s a danger to public health or a crop. That was not the case. I might add: Is it really necessary to kill a bird that knocked over a few dominoes for a game?” But the organizers of the domino fest defended their actions, saying that the bird had actually knocked over “a lot” of dominoes, and pointing out that “more than 100 people from 12 countries had worked for more than a month setting them up.”

Evidently, none of those 100 people, representing an international cross-section of the dominant species on the planet, ever realized during that month that if you are going to be setting up 4 million dominoes in a room, maybe you should CLOSE THE F***ING WINDOWS!

The organizers said they were aware of public outrage over the killing — more than 5,000 people had signed a condolence book on a website honoring the bird, and the bird’s killer has received death threats — and said they were considering “some kind of memorial or mention for the dead bird” during the TV broadcast of the domino event on Friday.

That event went off without a hitch, or any more hitches, anyway, and the Dutch dropped 4,155,476 dominoes, beating their own record of 3.9 million, which they set the year before, and which apparently was not enough. There does not seem to have been a moment of silence or other memorial for the dead bird, but the event’s creator admitted that the glory of the new record was somewhat dimmed by the shadow of the killing. The record generated “mixed emotions,” he said. “We all feel terrible about what happened.” 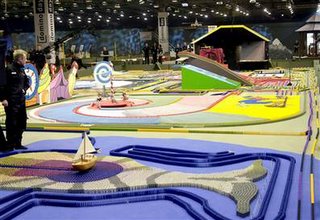 The Dutch somehow manage to go on with Domino Days despite their deep remorse over the bird’s death.
(Photo by Jaap Schaaf/EPA via Sipa Press)

The Netherlands Bird Protection Agency “appealed for calm” on Friday, but other groups said they would continue to call for prosecution.

Law Student Has Not Learned Not to Steal

Can You Sue Somebody for Forcing You to Go to Law School?

TIP: Choose an Alias That Doesn’t Already Appear on a Warrant