In December, 2005, police in Hudson Falls, New York, came upon a street fight and leapt out of their car to break it up.  Members of the crowd that had gathered shouted "he's stabbing him!" and Deputy Shawn Lovelace saw that one of the men had a knife.  He drew his gun and ordered all three to the ground.

It turned out the fight was staged, something that Lovelace said he was unaware of even though the man at whom he had pointed his gun was wearing a large yellow banana costume.

The knife-wielder was "Banana Boy," a.k.a. Chris Phelps, a 20-year-old man who, along with his brother and a friend, had a late-night TV show on a local station. The three were filming a skit for the show when Deputy Lovelace appeared, saw the knife (a prop switchblade), drew his gun on Banana Boy, and arrested all three men. 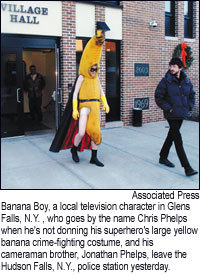 At least some of the local residents appear to have understood that a skit was being filmed.  One said he was shocked when the deputy drew his gun: "I said, 'Oh my God, don't shoot the banana.' It was the funniest thing I've ever seen."

Banana Boy was folded up and put into the back of a police car, and charged with disorderly conduct. He was still wearing his banana suit for his mug shot, and, as shown here, for his perp walk.

The station's owner, Jesse Jackson (probably no relation) said he understood why the police had done what they did and that he would discuss the matter with the Banana Boy crew. For their part, the Banana Boy crew acknowledged that they should have let the police know they would be filming a skit.

They also mentioned that they had gotten the entire incident on film and would be using for their show, and the resulting segment was probably way better than the original skit would have been.

A week later, Phelps appeared in court (in a black suit, not the banana outfit) and was sentenced to 40 hours of community service for the disorderly conduct charge. He was also fined $100.  Two of Phelps' co-conspirators, who I refuse to refer to as "his bunch" as the AP did, received the same punishment.

Updates on the Video-Rental Crime of the Century