The always-vigilant Transportation Security Agency has promulgated rules governing the security procedures to be implemented when a disabled traveler is traveling with a service animal, in case al Queda figures out how to pack a bunch of explosives into a dog or cat or helper monkey.

The TSA’s guidelines for helper-monkey security are reproduced below, with one addition that I made up.  If you can guess which one is fake without checking the TSA site, then you would likely qualify as a TSAMHSS (Transportation Security Agency Monkey Helper Security Specialist).  Actually, you could probably qualify with a high-school diploma or equivalent, but try to guess anyway.

Okay, they’re all real.  And I’m sorry, but if the War on Terror really requires me to potentially search a monkey’s diaper, then I surrender.  The terrorists have already won if they have really forced us to choose between security and the freedom not to root around in a chimp’s underpants.  I mean, please.

It is sad to know that the TSA will not touch my monkey.  But they can still love him!  Ihn lieben!  Meinen Helferaffen lieben! 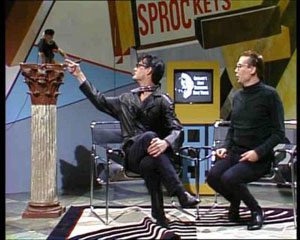 Lawyer-Musician Kicked Out of R. Kelly Courtroom for Trying to Hawk CD