Two employees of Idaho Ice World, a skating rink in Boise, were fired this week after they made a midnight fast-food run. That might not ordinarily have been a problem except that they were driving their Zambonis. 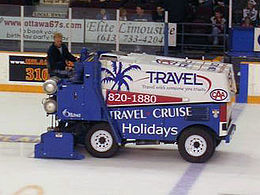 As many of you probably know, the Zamboni, named after its inventor, Frank Zamboni, is an ice-resurfacing machine that smoothes out pits and ridges in the ice of hockey and skating rinks. (Not to be confused with Giuseppe Zamboni, 19th-century Catholic priest and physicist, or the “Zamboni” that some of you may recognize as a professional-wrestling term for a “legitimate low blow.”)

This kind of Zamboni is not designed for street use, let alone to use the drive-through lane at Burger King. But it does fit, evidently, because the two employees each drove one to Burger King, through the drive-through lane and back to Ice World at about 12:30 a.m. on November 10. The round trip totaled about 1.5 miles, which would take almost 20 minutes at top Zamboni speed. I was sorry to find out that Boise does not seem to have had enough snow and ice recently that the Zambonis actually could have been used to smooth a path to Burger King and back, although I guess that would have given them away for sure.

Boise Parks Department Director Jim Hall said the two employees, whose names and ages were not released, “were fired immediately.” He said they would be charged with operating an unlicensed vehicle on a public street. “When we interviewed them,” he said, “they didn’t seem to be too concerned about it. I don’t think they understood the seriousness of it.” I don’t think Mr. Hall understood the humor value of it. And I’m sure the drivers were more than willing to give up their temp jobs in exchange for the memory of this midnight ride, a memory that they will cherish until the day one of their loved ones has his or her pits and ridges smoothed out by a drunk Zamboni driver inspired by their example.

Hall said that the Zambonis, which cost about $75,000, plus $10,000 for replacement blades, appeared to be undamaged.