Those readers who complained a while back when I made fun of a massive brawl that broke out in Taiwan’s legislature (yes, a couple of people complained about that) may be pleased to learn that a fight broke out last Thursday in an American state legislature.  Claiming he had been called a "son of a bitch" (I’m inferring that from the report’s use of "son of a [expletive]"), Alabama state senator Charles Bishop (R-Tuscaloosa) threw a punch at Democratic Senator Lowell Barron (D-Jackson).  "I responded to his comment with my right hand," Bishop later told reporters.

Barron denied saying that to Bishop and said  that he was (as CNN put it) "trying to get away when he was hit by Bishop on the side of the head near the ear."  Only on CNN do you get the kind of in-depth coverage that clarifies for viewers where the mysterious "side of the head" is located (hint: it’s near the fleshy thing you may know as "the ear").  I haven’t seen the FOX News coverage of this, but I imagine it will have something to do with Republicans having the guts to take preemptive action, while Democrats try to cut and run.

Anyway, Bishop did not deny hitting Barron, but on the other hand, he couldn’t, because the punch was caught by Alabama Public Television. 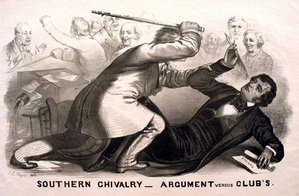 Bishop did say he regretted throwing the punch because "that’s not the way grown men solve their problems," but did not apologize to Barron.  In fact, he said that if Barron said it again, he would "whup" him again.

The tension apparently had to do with delays in election-reform legislation, which Republicans are

pushing but which Barron, chairman of the Rules Committee, has not allowed to come up for debate.  (As part of the majority party, Barron was not required to actually eat the legislation to stop it, as one brave minority-party legislator did in Taiwan.)

That afternoon, the Senate considered censuring Bishop, an act that apparently would have entailed expelling him from the chamber for the rest of the day, a grueling punishment indeed.  But Bishop didn’t wait around.  "I love every one of you," he said, presumably since Barron was not in the room.  "Most of all, I love this chamber.  I’m going home, and you all have a good day."  Barron, whose sides of the head were not seriously hurt, said he had not decided whether he would file any charges against Bishop.

Members of the Alabama House seeme disappointed in the other body.  "It’s certainly a black eye [get it?] on the Legislature, and the Senate in particular," said Rep. Jay Love.  There should be no further fisticuffs, since Thursday was the last day of the regular session.  But there is always hope for a special session, preferably a cage match.

CNN: Michael Jackson: Does Anyone Care?