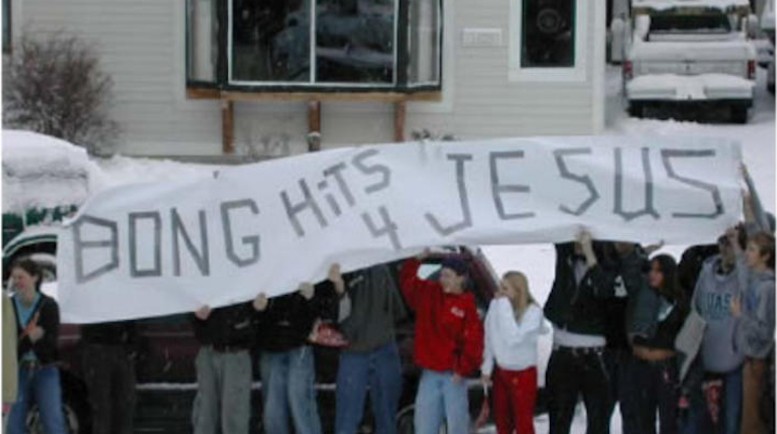 A united conservative majority of the Supreme Court ruled today in Morse v. Frederick that there is no First Amendment protection for a student who unfurled a banner supporting “BONG HiTS 4 JESUS” across the street from his school. Writing 4 the majority of 5, Chief Justice Roberts (joined by Kennedy, Alito, Scalia, and, surprisingly, Thomas) wrote that the Ninth Circuit had been wrong to find that Frederick was wrongly punished for the banner.

The majority first disposed of Frederick’s claim that this was not a school-speech case because he was not at school. He was not at school, but he was across the street with a banner pointed at school, so this part of the decision makes sense. Those who will be supporting bong hits for Jesus elsewhere, though, should be aware that the Court agreed with the language of the school superintendent’s decision that a student cannot “stand in the midst of his fellow students, during school hours, at a school-sanctioned activity and claim he is not at school,” even if he is not at school. Future banner-wielders should beware of attempts to expand the protected zone.

In fact, as Roberts noted, “every other authority” to consider the at-school issue had reached the same conclusion: the Ninth Circuit, the district court, the school board, the superintendent, and even “Principal Morse.” Thus, a number of judges who not long ago scoffed at the idea of consulting the law of other civilized countries on the question of the death penalty have signed on to an opinion citing “Principal Morse” as authority.

The harder questions were whether the school’s interpretation of the banner as promoting illegal drug use was reasonable, and if so whether it could restrict that speech at a school event. The Chief Justice of the United States then wrote a paragraph analyzing whether a reference to “bong hits” necessarily advocated the use of illegal drugs. He concluded that it did, for three reasons:

First, the phrase could be interpreted as an imperative: “[Take] bong hits …”—a message equivalent, as Morse explained in her declaration, to “smoke marijuana” or “use an illegal drug.” Alternatively, the phrase could be viewed as celebrating drug use—”bong hits [are a good thing],” or “[we take] bong hits”—and we discern no meaningful distinction between celebrating illegal drug use in the midst of fellow students and outright advocacy or promotion.

Third, he said, there appeared to be a “paucity of alternative meanings.” There was indeed such a paucity. (Every time a lawyer uses a phrase like that I have a mental picture of Joel’s dad in Risky Business saying “A slight preponderance of bass, perhaps?”) Frederick described it as “meaningless and funny.” Roberts noted that the dissenters also did not have much luck, referring to it variously as “curious,” “ambiguous,” “nonsense,” “ridiculous,” “obscure,” “silly,” “quixotic” and “stupid.” The majority concluded this was not political speech and so could be reasonably have been restricted by the school.

Justice Thomas wrote separately to make clear that he would go further and vote to reverse the school-speech standard set forth forty years ago in Tinker v. Des Moines School District. That is not activist, though, because during the colonial era, “teachers managed classrooms with an iron hand.” No unfurling of banners linking bong hits with the Savior, or any member of the Holy Trinity, was tolerated. Under the doctrine of in loco parentis (which I believe is Latin for “like a crazy parent”), Thomas wrote, teachers were allowed to do pretty much anything apart from inflict “clearly excessive” corporal punishment. One line of cases seems to have held that anything was okay other than an action taken with legal malice or one that caused “permanent injury.” (Going loco approved, so long as injuries only temporary.) Tinker was a sea change from that grand tradition, Thomas said, and he made clear his view that the Constitution flatly “does not afford students a right to free speech in public schools.”

Reading this, I assume that Thomas’s record of causing zero incidents of laughter during oral argument is intact.

Justice Stevens, joined by Souter and Ginsberg, agreed that the principal should not be liable for violating First Amendment rights, but did not agree that Frederick could be disciplined simply because his banner made an “oblique reference to drugs.” (I’m not sure “bong hits” is too “oblique,” but I admire his spirit.) Stevens did not quite call the banner “political speech,” but he noted that this was still viewpoint discrimination and should be presumed unconstitutional unless there was some reason to think the speech would actually cause the harm that the government seeks to avoid. Stevens did not think there was a big risk of that:

Admittedly, some high school students (including those who use drugs) are dumb. Most students, however, do not shed their brains at the schoolhouse gate, and most students know dumb advocacy when they see it. The notion that the message on this banner would actually persuade either the average student or even the dumbest one to change his or her behavior is most implausible.

You know, I once saw a student shed his brain at the schoolhouse gate, and it was no prettier than that metaphor. But the point still seems like a pretty good one.

The fourth dissenting vote was Justice Breyer, who agreed that there should be no claim for damages but thought the case should be remanded because Frederick’s punishment might turn out to be justified on some non-constitutional ground. That was just a speed bump to the majority’s speeding Camaro of constitutional interpretation. The Chief gave it the footnote treatment.

So, general agreement on qualified immunity for the principal, a majority voting that the school’s position was at least reasonable, three votes strongly supporting freedom of speech, and one vote for the Colonial standard of punishing free speech with physical punishment (short of permanent injury, of course).

Suspect Who Asks About His “Other Murder Case” Is Charged With That One, Too