A quiet-title action filed in San Francisco yesterday was described this way:

Quiet title action. The plaintiffs seek to re-establish title to several parcels located approximately in the center of a block in San Francisco bounded by Washington, Sansome, Clay and Montgomery Streets.

Something about that block sounded familiar to me, so I checked Google Maps.  Turns out it has a giant pyramid on it. 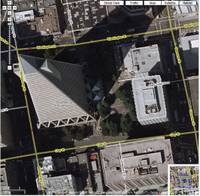 Depending on what “approximately in the center” means, could be that somebody out there owns some relatively valuable real estate. I post this as a public service.