No surprises here — Roy Pearson's motion for reconsideration of the verdict against him in the lost-pants case was swiftly denied by Judge Judith Bartnoff. She ruled on Monday that the 35 pages of his motion did not include any new argument or authority that might justify a different result.

She continues to be way too restrained, in my personal opinion. The Monday order was only five paragraphs long and this seems to be as ugly as it got: the judge wrote that Pearson's "continued insistence that the 'Satisfaction Guaranteed' sign in the defendants' dry cleaning store is an absolute, unconditional guarantee that the defendants must accede to any customer demand for satisfaction, no matter how unreasonable or even false" had already been "presented in his pretrial statement, his trial brief, and his arguments at trial," and was not getting any more convincing.

But maybe it will make more sense on appeal. (Hey, fifth time's the charm.) The Post says that Pearson "is expected to appeal Bartnoff's verdict in a couple of weeks," and although it doesn't say why it expects him to appeal, that seems like a fair prediction based on Pearson's past stubborn refusals to face reality.

The other report I found of today's order didn't really provide any additional details, but it did provide what is, as far as I know, the first public glimpse of The Pants, seen here taking questions at a press conference after the hearing: 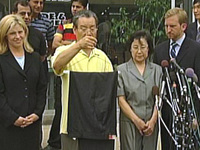 The Pants: "Can't we all just get along?"

A fundraiser is to be held on July 24 to help the defendants with the legal bills they have incurred. I can tell you this: if they want to raise some money by selling The Pants, I'll buy them. I think they would make a great first exhibit in the Lowering the Bar Museum of Legal Oddities, hopefully followed by the Contract Written in Blood, the "Bong Hits 4 Jesus" Banner, one of those defective Japanese supertoilets that were occasionally catching fire, and maybe a toga from the parties they used to have at Abu Ghraib.  Not necessarily in that order.

Good Reason to Kill #56: Disagreed About the Value of a College Education