Russell Tavares was sentenced on Monday to seven years in prison after he pleaded guilty to felony arson for setting fire to a man’s trailer home in 2005.  Tavares had become angry after the man called him a "nerd" on a website that the two frequented, so angry that he left his Virginia workplace, drove 1,300 miles to Waco, Texas, and burned the man’s trailer to the ground.

Tavares, scarily enough, was a 25-year-old weapons systems operator at the Navy’s AEGIS Training and Readiness Center in Dahlgren, Virginia.  Police say he was also "obsessed with fire, guns and knives," none of which are particularly good things to be obsessed with, and would post pictures of himself online (under the name "Pyrodice")pointing firearms at various people and things.  The victim, 59-year-old John Anderson, also posted digitally altered photos when he could spare time from his day job, running the Museum of Horrors haunted-house attraction in Elm Mott, Texas.  (According to Anderson’s website, he runs two haunted houses in that location, both utterly terrifying.  Also there’s a DJ every night.)  He called himself "Johnny Darkness."

So, truly a clash of titans.  Their lives apparently intersected on orfay.com, a site where people post pictures and chat or something to that effect.  Anderson said his page became the most popular there, and drew many comments including not a few insults.  He would "say bad things back to them" as appropriate.  "It was like, ‘Your mother wears combat boots,’" Anderson said, although it was unclear whether he had actually met the mothers of anyone who contacted him.  As fate would have it, Tavares got involved.  Anderson said he made fun of Tavares’ own picture, calling him a "white Steve Urkel," and ultimately posted the picture with "Revenge of the Nerds" appearing at the top.  This seems to have been the last straw.

Apparently oblivious to the irony of going after someone for being called a "nerd" in an Internet flame war, Tavares took a leave of absence from work and started driving.  (He seems to have found Anderson’s address via the haunted-house website.)  To build suspense, he took a picture of himself at the border of each state he passed through and posted it on the website.  "Here I come, Haunted House Man," the pictures seemed to say, although they didn’t really say anything at all, since they were just pictures.  Thirteen hundred miles later, Tavares was in Waco. 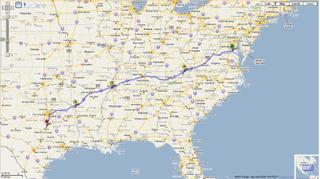 His attorney claimed later that Tavares was really driving to Arizona to see his family and made a last-minute decision to go get Anderson.  That is possible, given the route, but however he got there, Tavares admitted he had intended to scare Anderson with a shotgun and then shoot his computer.  Only when the computer had paid in full for its crimes could he rest, it seems.  But he chose instead to set a fire near Anderson’s propane tank before fleeing.  No one was injured, but according to the report, "the trailer, located behind the haunted house, was a total loss."  Tavares was later arrested in Arizona.

He pleaded "no contest" and was sentenced on Monday.  Officials said that Tavares showed no remorse and still had not let the feud go, which they inferred from the fact that he was taking cell-phone pictures of Anderson in the courtroom while waiting for his sentencing hearing.  Tavares blamed his own computer, too, apparently saying "if it wasn’t for the computer, this wouldn’t have happened."  I guess he may have been referring to Anderson’s computer, which he had planned to kill, or maybe the two computers conspired against him.  Neither machine was indicted.

An investigator noted that the case was sad because Tavares had now ruined his entire career.  "He is a very smart person with fire," the investigator said.  "He knows his stuff."  Sure does, and it’s too bad he has ruined such a promising fire-starting career after only one attempt (which was 100% successful).  As for Anderson, he will try to rebuild, but says he is still being harassed by someone — or something?  "Before this happened," Anderson said, "the rule was: Nobody messes with the haunted house guy."  He did not say why that was the rule.  He’d better hope it is the rule again about seven years from now.

Jesus May Not Have the Votes to Become King of Poland

Study Shows Broken Bottles Can Be Used to Stab People