Eduardo Arrocha began classes yesterday at Thomas M. Cooley Law School in Lansing, Michigan, saying he had found a new calling.  Arrocha, who has spent the last 15 years eating nails as part of a Coney Island sideshow, said it was time to move on.

"Coney Island was very good to me, but it was just time to go," said Arrocha, who has been known since 1992 as "Eak the Geek."  "Eak the Geek is the performance," he said, "but I’m also a person."  And as his resume and his new ambition suggest, he is not what you might expect when you hear the words "carnival sideshow act."  While he is heavily tattooed, eats nails and walks on glass, he is also a poet and artist who has toured with a hard-core punk band.  His solo act at Coney Island "displays his many tattoos, includes a lecture on diversity and stands three audience members on his chest as he lies sandwiched between two beds of nails." (Emphasis added.)

But Arrocha has decided to do more than just lecture about diversity.  He says that he hopes to use his law degree to speak for "alternative people" like himself.  "I hope to have a little office in New York," he said, "and work with the alternative people, all the so-called riffraff, to give them legal representation that is not judgmental."  He continued, "I know it sounds weird, but I want to be a freak lawyer."

I had been considering making that my niche, too, but I would be in serious need of some street cred if I tried to compete with this guy. 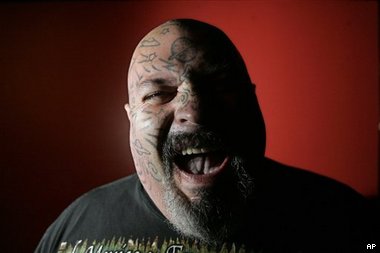 So congratulations and best of luck to Eak the Geek, now faced with new challenges as he changes professions.  "I’ve never had to tie a tie before," he said.  I’m pretty confident that anybody who can eat nails and walk on glass can master that skill.