In August, Spanish police finally captured "The Loner," the country’s most wanted criminal.  The Loner, whose secret identity was Jaime Jimenez Arbe, had robbed more than 30 banks and killed three policemen during his crime spree.  But his lawyer has sought to portray Jimenez as a fighter for justice who robbed banks only because they stole from the public. 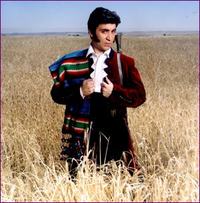 And the Jaime Jimenez version of the Curro Jimenez version of the style of Robin Hood seems to have lost something in translation.  Specifically, while The Loner did robaba a los ricos he had not quite gotten around to darselo a los pobres.  Police said that so far as they could tell, The Loner had not given any of the money away, but had stashed it in several different bank accounts.

Maybe he just wanted to get the first part of the style perfected before moving on.  That does seem to be the hard part.

The murder of three policemen is also a little inconsistent with the Robin Hood characterization, but Jimenez said in a letter to newspapers that he regretted the deaths.  "I am not a killer," he said (apparently meaning "one who enjoys killing" as opposed to "one who has killed," which he has), "and if I was obliged to shoot at officers of the law, it was always against my will and in order to avoid being arrested."  Again, without the "only trying to help others" part, this falls a little flat.

Jimenez’s attorney also said that, at the time his client was arrested, he had finished with banks anyway and was planning to move on to insurance companies.