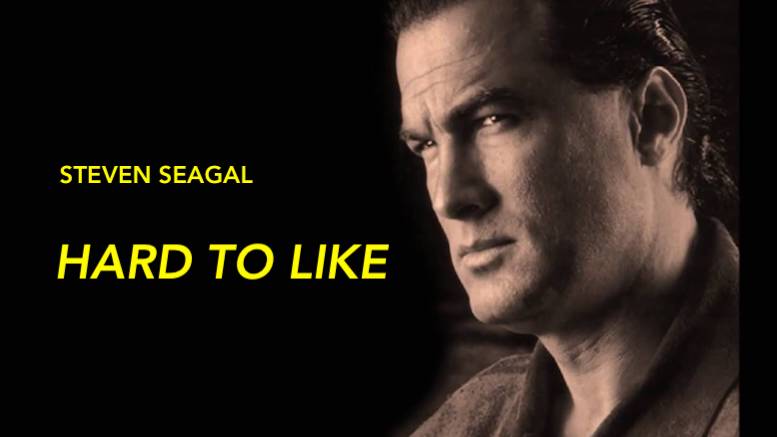 It was a working title

Steven Seagal, who you may remember from such action films as Under Siege, Under Siege 2: Dark Territory, and Under Siege 3: Straight to DVD, has demanded that the FBI apologize for ruining his career by making false allegations that linked him to the Anthony Pellicano scandal.

In August 2007, Seagal claimed that “[f]alse FBI accusations fueled thousands of articles saying that I terrorize journalists and associate with the Mafia…. These kinds of inflammatory allegations scare studio heads and independent producers—and kill careers.”

Apparently, FBI agents referred to Seagal in affidavits filed in the Pellicano case, saying that Seagal was one of the celebrities who had hired Pellicano for alleged dirty tricks such as intimidating reporters. According to an article in the Los Angeles Times, “Seagal, sipping tea in his Mandeville Canyon home, in a dining room filled with Japanese art, said the premise of the allegations was preposterous” and “laughable.” (He has since taken and passed a polygraph test on at least some of the allegations.) He also implied that the FBI was seeking to discredit him personally. “Do you believe it was an accident that this secret document was placed in a public file?” he asked.  “I don’t.”

And if Steven Seagal doesn’t believe something, my friend, you’d best consider not believing it too. This is a man who believes that he is a tulku, or reincarnation, of the “treasure revealer Chungdrag Dorje.” To be fair, a Buddhist monk told him that, so he has some reason for believing it. Less clear is the source for his belief in a special link between his own spirit and those of animals, something that contributed to what his Wikipedia entry describes as a “mystical dog incident” that seems to have changed his life:

While being interviewed by PETA [an interview you can see here], Seagal was asked to provide an example of a special interaction with an animal. To lend context and meaning to his animal rights work, Seagal offered the story about a dog which approached him during his early aikido years in Japan. Seagal described feeling as if he had known this white dog forever. After keeping the dog for a few days, the dog (by barking) warned Seagal that his dojo was on fire. Seagal quickly summoned help to put out the fire. He never saw the dog again.

I would like to think that if my dojo was on fire, I would know it without needing the help of a mystical spirit dog, but I guess you never really know how you’ll react until your dojo is actually burning. To his credit, Seagal has continued to strongly support animal rights, a noble effort, and one that will give him something to do now that his career, formerly Hard to Kill, now appears to be Half Past Dead. And as the following chart shows, this decline started well before the Pellicano scandal broke in 2002: 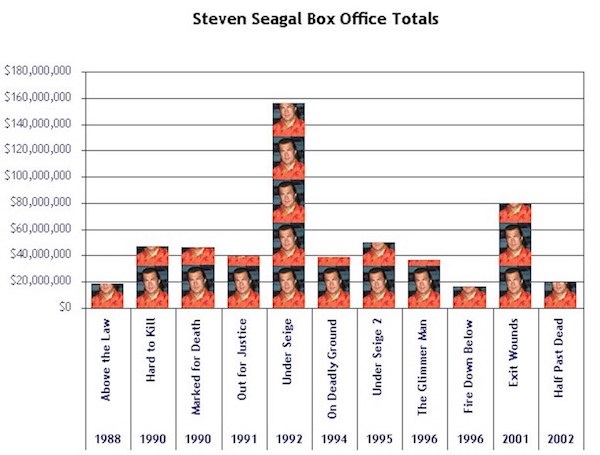 Since 2001, Seagal has had no major hits, but instead has made a dozen or so straight-to-DVD films that in total have generated about $25 million. At least one longtime Hollywood publicist, though, was quoted by the L.A. Times as saying that there may be something to what Seagal is saying.  “This controversy made the studios very nervous,” said the publicist. “Let’s be honest: Steven Seagal was no Harrison Ford when this happened. But these accusations certainly hastened his decline.”