On January 22, defense attorneys representing Cesar Rodriguez conducted a remarkable cross-examination of a detective who had been called to testify against their client.  Rodriguez is on trial for the murder of his 7-year-old stepdaughter, Nixzmary Brown.

But, defense attorneys asked, could the "World’s Greatest Dad" have done such a thing? 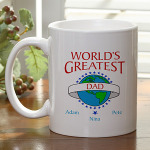 As evidence that Rodriguez is (or was) in fact the World’s Greatest Dad, defense attorneys introduced a photograph of a mug their client may have been given by the girl.  Emblazoned with the words, "World’s Greatest Dad," the mug offered indisputable proof of Rodriguez’s parenting skills and virtually guaranteeing his exoneration.  Given the undisputed existence of millions of fathers and stepfathers who have not murdered a child (or anyone, for that matter), and since Rodriguez is a better father than any of them, as he is the world’s greatest father, it follows that Rodriguez could not have been the killer.  Ladies and gentlemen of the jury, I have nothing further.

Defense attorneys may not have been aware, however, that other such trophies exist, which could cast at least some doubt on Rodriguez’s claim.  The words "World’s Greatest Dad" have reportedly been found on t-shirts, name tags, belt buckles, trophies, keychains, greeting cards, baseballs, magnets, grilling aprons, grilling hats, grilling tools, and the flag of Turkmenistan (although my Turkmen is a little rusty).  Examples of many such items, in fact, can be found at the "World’s Greatest Dad Store," which bills itself as the "one stop shop for all of your ‘World’s Greatest Dad’ needs."

It’s not clear whether this came out during the testimony of Detective Joseph Bello (but it probably did).  Bello conceded that he took the picture of Rodriguez’s award and thought it was "weird," but said he did not know who bought it.  Lead prosecutor Ama Dwimoh said there did not appear to be any evidence as to who bought the mug, but seemed to suggest that she didn’t give a rat’s ass.  "As evidence comes out," she claimed, "it becomes clear that the last thing he was was ‘World’s Greatest Dad.’"

I think the jury will be out for a while on this one.

No Questions Again This Term from Justice Thomas