Reuters News reported last week that a court in Bitola, Macedonia, has convicted a bear of theft and property damage in a case brought by a beekeeper.

Rumors of violent protests against the ruling in Jellystone Park could not be immediately confirmed.

Beekeeper Zoran Kiseloski told reporters after the case concluded that he had tried to deter the bear from stealing his honey in the first place. “I tried to distract the bear with lights and music because I heard bears are afraid of that,” said Kiseloski. The source of his bear-deterrence information was not disclosed, but it appears to have been successful.

This may or may not have been related to the fact that the music involved was “turbo-folk,” a style that became popular in Serbia, along with war crimes, during the 1990s. The best-known turbo-folk artist, Ceca (a.k.a. Svetlana Ražnatović), was once married to notorious criminal and paramilitary leader Arkan, until he was assassinated in 2000.  She remains extremely popular in Serbia.

Bears hate her, though. 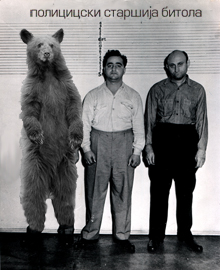 Kiseloski’s plan worked until his generator died. But then the bear, which seems to have loitered just out of turbo-folk range, returned and destroyed the beehives, stealing the honey and possibly nearby pic-a-nic baskets. What to do? Answer: prosecute the bear.

According to the report, the case lasted a year. It was not clear why this took so long—they may have been trying to find the bear, which had absconded, or it is possible that there was an earlier conviction that was thrown out due to problems with the lineup used to identify the culprit.

What was the point of convicting the bear, anyway? The court seems to have reasoned that, ordinarily, convicting the bear would make its owner responsible for the damage. In this case, the bear was a free agent, but the court apparently extended this doctrine to the state by noting that the bear, an endangered species, was under state protection. Thus, the effect of the conviction was to force the state to pay the beekeeper’s damages, approximately 140,000 denars (which may or may not be a lot).

I suggest that the state try to recover some of these denars by suing the purveyors of turbo-folk for environmental damage and/or bear harassment. Hey, if the beekeeper won, I don’t see why this wouldn’t work, too.