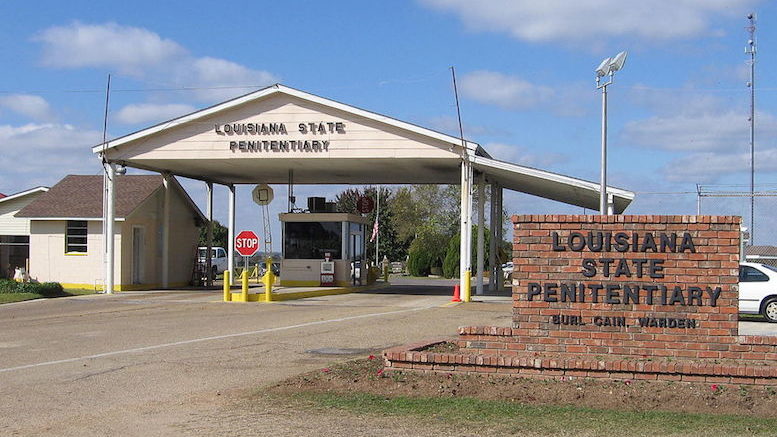 Despite that title, this is not the bear from “Bear Convicted,” a March item that had to do with a bear prosecuted in Macedonia for stealing from a beekeeper. That bear is still at large, as you would know if you had been paying attention to my bear stories. This bear is not at large, although that seems to be by choice, because according to prison officials it is living in the middle of the Louisiana State Penitentiary.

I had a vision of a bear sitting there in the middle of the prison yard, maybe having a smoke, but it turns out that the LSP, better known as Angola, is actually about the size of Manhattan. While it is a maximum-security facility, that applies only to some of the living quarters and not the entire area, which sadly prevents me from asking how a bear broke into a maximum-security prison in the first place. Most of Angola is run as a farm, but that about 3,500 acres of it is “mostly untouched piney woods” in which, presumably, bears can live. This bear was seen last week by an inmate presumably going about his farm chores, and experts have said that it is probably a 450-pound female black bear.

Prison executives said they believe there may be as many as eight to 10 bears in the prison, and the warden said that he is just fine with the big one that was recently spotted.  “I love that bear being right where it is,” said Warden Burl Cain, proud owner of a name perfectly suited for being the warden of a prison in Louisiana. “I tell you what, none of our inmates are going to try to get out after dark and wander around when they might run into a big old bear.  It’s like having another guard at no cost to the taxpayer.”

Only if the inmates don’t find out that black bears mostly eat berries, said Maria Davidson, manager of the state wildlife department’s Large Carnivore Program. Vegetable matter makes up as much as 90 percent of a black bear’s diet, she said, and the other 10 percent is mostly bugs and inmates. Okay, she didn’t mention inmates, and in fact completely undermined the warden by saying that, to her knowledge, there had never been a predatory attack by a black bear in Louisiana even on pets or livestock. “As for a bear coming out and rushing an inmate,” she said, “I don’t see that happening.”

So that’s disappointing, but on the bright side, there are also alligators, rattlesnakes and “vicious wild pigs” on the prison grounds. “And there have been sightings of panthers,” said another prison official, sounding hopeful.

Also: Plan Your Next Family Vacation at the Louisiana State Penitentiary