Stephen Shoemaker was so determined to get to the courthouse in order to be sentenced for a drunk-driving conviction that, when his brother didn’t show up to give him a ride, he says he just started walking.

That does show determination, since Shoemaker lives nearly 25 miles from the courthouse. 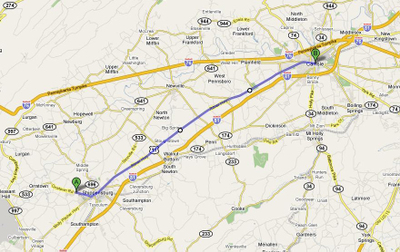 Shoemaker reportedly started walking at dawn from his home in Shippensburg, Pennsylvania, hoping to reach the Cumberland County Courthouse in Carlisle by 9:30 a.m. on June 11.  Since sunrise on June 11 was at 5:39 a.m., walking over 20 miles should take at least four hours, and the temperature hit 94 degrees that day, this was not a particularly good plan, but Shoemaker said he had no other option.

He made it to court, but was about six hours late, partly because he had to stop for a while at a local hospital to be treated for dehydration.  "I got a little bit light-headed," Shoemaker admitted.  "I about passed out."  Court personnel said Shoemaker had made it to the hospital in Carlisle by 10 a.m., which is really making pretty good time, but the fact that they admitted him for treatment put him way behind schedule.  According to the report, Shoemaker finally appeared before the judge at 3:30 p.m., "deeply tanned and looking more than a little tired."

Shoemaker said he worried that if he was arrested for missing his court date, it would ruin his chances of going full-time at a job he recently started.  When he finally arrived, he asked the judge to defer his sentencing until July, by which time he expects to already be working full-time, and can then keep his job via work-release.  The judge initially did not want to grant the deferral, only because "that means he’ll have to walk back to Shippensburg."  The public defender volunteered to give him a ride, though.

While court personnel found this comical, they also admitted to some admiration for Shoemaker’s trek.  "At least it shows some respect for the law," said one.  It also shows a serious desire to get a job, so hopefully the judge will cut the guy some slack.