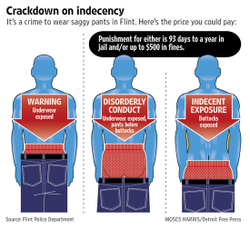 Last week I reported (again) on the continuing battle to secure the homeland against the threat of sagging pants, a battle that had flared up in Flint, Michigan, where Chief David Dicks announced that disorderly conduct/indecent exposure laws would be pressed into service depending on the nature of the infraction. The Detroit Free Press created this helpful graphic (click to enlarge) in an effort to educate the public as to what is and is not permitted under the Flint enforcement scheme.

As I also mentioned last week, an anonymous commenter on one site had questioned the ACLU’s impartiality, suggesting it would not have gotten involved had the threat been to the customs of a different culture, such as the wearing of mullets or flannel shirts. I wrote the ACLU to ask about that:

I’ve been following with interest the battle with David Dicks in Flint over his anti-low-pants crusade. See, e.g., http://loweringthebar.net/2008/07/update-flint-po.html.

I am mentioning it today in another related post, and I had a question. An anonymous commenter on the Minneapolis Star-Tribune’s website alluded to the racial overtones of this debate, by saying, “Would the ACLU lodge a complaint if a town [banned] mullets or flannel shirts?” he wrote. “Doubtful.”

But you would, wouldn’t you?  You may dislike mullets as much as I do, but I’m sure you would go to bat for the right to wear them.

If the police were stopping and searching individuals simply because they sported mullets or flannel shirts, of course we would object. In a free society, an unconventional (or conventional) hair style or shirt does not constitute probable cause to charge a person with a crime or search a person.

That’s what I thought. And may that day never come, but just in case it does, here’s some potential guidance: 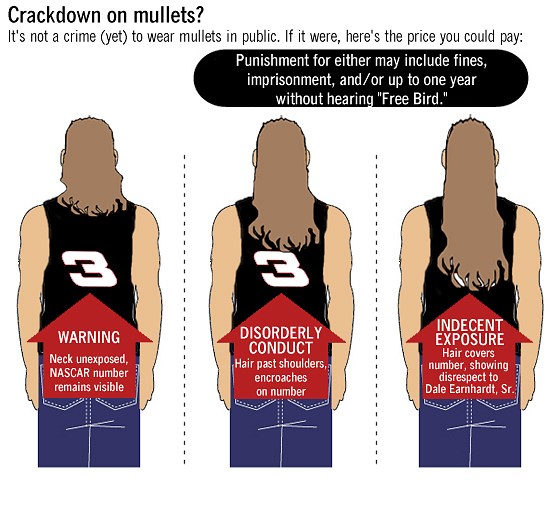 You may wish to act accordingly.

Link: Michigan ACLU, “Enforcement of Flint Saggy Pants Rule is Unconstitutional and Must Be Stopped,” (July 14, 2008).

Scanners Successfully Locate Things for TSA to Steal, Not Much Else