Roy Pearson Jr., who is on the verge of getting his own category here, was in the D.C. Court of Appeals on October 22 to argue for the reinstatement of his $54-million lawsuit against the dry cleaners who he says lost his pants. 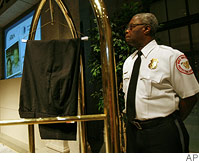 For two years now (search for "Pearson" in the Google search box to the right for past coverage), Pearson has entertained the nation with his crusade against Custom Cleaners, which he charged with losing a pair of his pants and then refusing to honor fully its promise of "Satisfaction Guaranteed."  Custom Cleaners maintained that it had found his pants, but Pearson claimed those were the pants of another, and refused to accept them. The cleaners ultimately offered up to $12,000 to settle the case, but that failed to satisfy Pearson, whose satisfaction, he claimed, had been guaranteed. It was all very ridiculous, and Pearson's case was eventually thrown out after a bench trial, though not before he had the chance to weep bitter tears of loss and regret during his testimony. Pearson was not reappointed to another term as a D.C. administrative law judge, although everyone involved insisted it had nothing to do with L'Affaire du Pants.

Pearson's appeal was heard on Wednesday before a three-judge panel, in a packed courtroom. "This is not about a pair of suit pants," he told the panel, which is something he has said before and can say as many times as he likes without changing the perception that the case is about a pair of suit pants.  See, e.g., "Judge Drops Pants, Suit Still On," Lowering the Bar (June 6, 2007).  Pearson maintains that the case is about the promise of "Satisfaction Guaranteed," which he said was "very subjective" and has "no parameters at all." That's probably true, but what Former Judge Pearson doesn't seem to understand is that statements or advertisements like that are generally not a valid basis for a fraud case, because a reasonable person would not take them literally. So, while it's obviously true that Pearson has not been satisfied, it is still fair to ask, "where's the fraud?"

Which, oddly enough, is what the judges asked. According to the Washington Post, they "repeatedly asked him to identify previous District cases to support his argument about the reach of 'satisfaction guaranteed.' Pearson said he could not provide examples." (This is generally a sign that an argument is not going well.) "At one point, [Judge Michael W.] Farrell threw up his hands and asked 'Where is the fraud?'" (That's another one.)

Christopher Manning, the weary but valiant defender of Custom Cleaners, again noted that Pearson has been offered his pants back time and again, but will not accept them.  Pearson, he said, is "entitled to nothing." Manning told the Post that he was confident the court would not reinstate the lawsuit, which is the kind of thing lawyers always say but in this case is almost certainly true.

Manning also said he thought this would be the "last episode" in the drama, something that briefly caused me to also weep bitter tears until I read, at the end of the report, that Pearson had sued the D.C. government in May alleging that its judicial commission acted illegally when it failed to reappoint him to another ten-year term. Then I dried my eyes, and saw a bright future in which, years from now, I am sitting (next to my wives Jessica Alba and Christina Aguilera, who given the passage of time are no longer mourning the sudden and still-unexplained deaths of their husbands) in a courtroom in the Hague, listening to Judge Pearson argue his case before the International Court of Justice.

Link: Washington Post (log-in may be required)
Link: Marc Fisher's blog for the Post about the argument

Google Searches That Led to “Lowering the Bar,” Part Two