While there are far too many road-rage incidents involving firearms, it is heartening to know that in at least some cases, men are still using the more honorable melee weapons with which their forefathers brutalized each other, back when "road rage" involved chariots.

Maybe "heartening" is not the word I'm looking for.

On November 14, a 51-year-old Nebraska man was sentenced to 30 days in jail for throwing an axe at another driver.  According to the Lincoln Journal Star, the incident took place in June after a near miss between a car and a motor home.  After the two drivers "exchanged gestures and profanities," the driver of the car pulled in front of the motor home and forced it to stop.  He thought better of that after the motor home's driver — named "Tango Crenshaw," according to this report – emerged from his vehicle with an axe.  Quickly retreating to his car, the other driver unwisely made a U-turn which meant he had to drive back past Crenshaw, who then heaved the axe at him.  Remarkably, the axe sailed through the driver's-side window, presumably open due to all the pre-incident gesturing.  Luckily, it sailed through blunt-end first, because it struck the driver in the ribs.

Police arrived shortly thereafter, by which time Crenshaw, apparently well-supplied with tools to throw, had a shovel out.  Crenshaw claimed the other driver had tried to run him down and that he was only defending himself, but a witness said otherwise.  He was charged with assault and use of a deadly weapon, but ended up pleading guilty to lesser charges including the always-popular "criminal mischief."

Almost as medieval was an incident in Port Orchard, Washington, late last week in which a 32-year-old man was jailed for reckless endangerment after he threw a wrench at another car.  This throw, too, was remarkable; witnesses said the man was passing vehicles at a high rate of speed when, "for no apparent reason," he threw a wrench, which shattered another car's driver's-side window and hit the driver in the left shoulder.  And that does seem like a pretty good toss, since he was passing at high speed in the left lane and so presumably lofted the wrench out of his own driver's-side window and over the car with his left hand.  I wouldn't bet on even Tango Crenshaw to make that shot.

Neither of those stories really compare, though, to the New Zealand case earlier this year in which, during a car chase, a trident was flung from one moving car through the open window of another moving car and lodged in the skull of the driver, and yet the chase continued.  See "Arguments Commence in New Zealand Spear-Assault Trial," Lowering the Bar, April 9, 2008.  That story was enhanced by the victim's claim that he didn't feel the spear ("Justin just said, 'You've got an arrow sticking out of your head, bro,'"), and by the defendant's position that, while he admitted throwing the spear into the other car, he denied doing it with "reckless disregard for the safety of others." 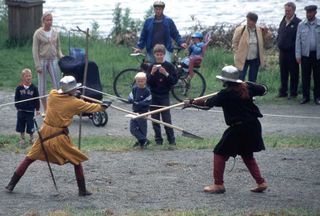 While the use of such weapons is certainly better than using firearms, which pose a greater risk to bystanders, better still would be for drivers to work out their differences hand-to-hand.  Please make a note of it.

Biter Says Bites Were to Teach Bitee Not to Bite