Good news — convicted "Unabomber" Ted Kaczynski, now serving a life term for murder, will not be getting back any of the unabomb-making materials that the FBI seized from his cabin in 1996. 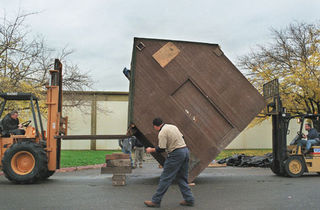 Kaczynski's cabin. Defense experts argued that Kacyznski's
skewed worldview was an accidental result of living
at a 45-degree angle for many years.  No they didn't.

The government confiscated a variety of things from Kaczynski's Montana cabin after his arrest.  Actually, I guess they took everything, including Kaczynski, and the cabin.  (The picture above actually shows it being prepared for transport.)  The personal property taken included papers, books, guns, and bomb-making materials.  In 2003, Kacynzki filed a motion seeking the return of the remaining property (some of it had been sold), but the courts eventually ruled that the government should submit a plan for selling or disposing of it in a way that would, if possible, benefit Kaczynski's victims and/or their families.  The recent opinion came about after Kaczynski objected to the government's plan.

Kaczynski raised (and lost) some First Amendment arguments about the disposal of his papers, but more interesting was his claim that he was entitled to get back his "derivative contraband."  That means things that, if taken separately, are all "innocent materials," but which could be combined to make things that, let's say, blow up.  K, whose name I am sick of typing, correctly noted that the previous owner has a presumptive right to get seized property back, but the court held that in this case the government had successfully rebutted that argument.  It had submitted a list of the 100 items involved, and explained why it believed each of them could be used for bombs.  K, surprisingly, offered "no innocent explanation" in reply.  Plus, said the court, K's motion was one that is based in "equity," to which the doctrine of "unclean hands" is a defense.  So as not to keep you in suspense any longer, I will reveal that the court held that K did in fact have "unclean hands" in this matter.

K was also back in the news recently when he objected to his former cabin being put on display in Washington, D.C. at the horribly named "Newseum."  He didn't win that argument, either.

Superheroes Must Be Able to Do Five Pull-Ups, Group’s Leader Says