The last golf-ball-strike case I reported on was Yoneda v. Tom, a 2006 case in which the Hawaii Supreme Court ruled that the plaintiff could not recover from the man who hit him in the eye with a golf ball because one who golfs assumes the risk of being hit by errant balls. “Hitting a golf ball at a high rate of speed,” wrote the court, “involves the very real possibility that the ball will take flight in an unintended direction.”

It sure does. Including what must be the least intended direction: straight back the way it came. 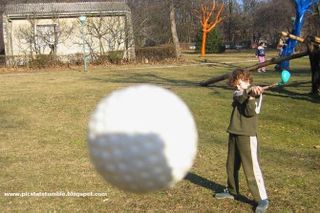 This was learned by Paul Sanchez, a 67-year-old golfer from Manchester, New Hampshire, who whacked a ball down the fairway only to have it return the favor after it ricocheted off a yardage marker. The ball came straight back at Sanchez, hitting him in the right eye and allegedly injuring him severely. The ball hit Sanchez “before he could even—pardon the expression—blink,” said Sanchez’s attorney, uttering a wisecrack that his one-eyed client must find hilarious.

According to court records, the ball shattered Sanchez’s right supraorbital ridge. It may have injured his eye permanently as well – the article describes the accident as leaving him blind in one eye, but also says he suffered a “blurring or total loss of vision.” So hopefully he may still recover from this. But one thing, at least, is for sure—it’s the golf course’s fault.

Sanchez sued Candia Woods Golf Links earlier this month, saying the course was negligently designed and the owners failed to warn him of the risks. Specifically, he says the markers were “too rigid” (thus allowing ricochets), and that they should not have been placed in or near the fairway. He also complains that no warnings were posted in the pro shop, tee boxes or on scorecards, all of which apparently should have said something like “WARNING: Yardage Markers May Pose Risk of Self-Induced Ocular Ricochet Injuries.” The suit also contends that golfers should have been told that the markers can be removed during play, I guess on the theory that, on every hole, somebody would jog down and remove all the yardage markers before anyone teed off, and then go back and reinstate them before the group moves on. That just has FUN written all over it.

That might all sound dumb, but have no fear—the lawyer said he consulted a “golf expert” before filing the case, to make sure it was legit. “It’s not a frivolous, run-it-up-the-flagpole-and-see-who-salutes kind of thing,” he insisted. (I pause here to praise the unsung hero at the Union Leader who carefully hyphenated that entire compound adjective. Here’s to you, Mr. Compound-Adjective Hyphenator.)

Hey, here’s an idea for a misrepresentation claim—Candia Woods calls itself “The Friendliest Course in New Hampshire.” To one man, at least, it proved to be awfully hostile.

How Did That Taster’s Choice Case Turn Out?

Can You Copyright a Feathered Suit? Mardi Gras Indians Want to Know