Reasonable people can disagree as to whether cameras should be allowed in the courtroom.  I personally think they should not, because cameras tend to make people do stupid things like wear Star Trek uniforms to court.  But I am willing to suspend that opinion for purposes of any oral argument that will be shown live on a Jumbotron.
The only example of that of which I'm aware (please advise if there are others) happened yesterday when the California Supreme Court heard argument on the constitutionality of Proposition 8, the ballot initiative that banned gay marriage in California.  You could say there has been substantial interest in the matter here in San Francisco, sufficient interest that the city government set up a giant TV screen near City Hall so that the large crowd could watch the exciting play-by-play. 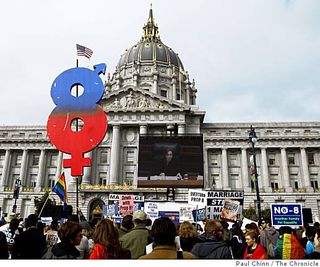 The headline of this San Francisco Chronicle article is, "Prop. 8 debates flare at Civic Center viewing," and here, according to the quotes provided, are the two sides in that debate:

Anti-8: "Marriage is about love, and love is love."

Wait. Which One of You Was Injured Again?

Randy Quaid Caught Trying to Sneak Back Into U.S.