Reversing a lower court's ruling that Pringles did not qualify as "potato chips" for purposes of taxation, Britain's Court of Appeals has held that they are, basically, close enough.

This matters because if Pringles are considered "potato chips" – or "potato crisps," as they are mistakenly called in Britain – then Proctor & Gamble UK has to pay a value-added tax, but otherwise Pringles are exempt.  Upon this determination turned, as the Court of Appeals put it, "rather a lot of money." 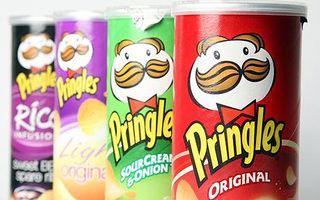 Specifically, the question was whether Pringles fall into the category of "potato crisps, potato sticks, potato puffs and similar products made
from the potato, or from potato flour, or from potato starch. . . ."  Procter & Gamble thus found itself in the somewhat awkward position of having to argue that Pringles aren't "potato chips" because they contain "non-potato flavors," are less than 50 percent potato, and have "a shape not found in nature."  The lower court agreed with P&G, finding a Pringle in some ways "quite unlike a crisp," and most importantly finding that a product less than 50 percent potato could not be said to be "made from the potato."

Not so, said the Court of Appeal.  It found that the plain meaning of the term "made from" did not require the product to be more than half what it was allegedly made from.  This is not a question for scientists or "culinary pedants," the court said: "[M]ost children, if asked whether jellies with raspberries in them were 'made from' jelly, would have the good sense to say 'Yes,' despite the raspberries."

The other stuff that Pringles are "made from": corn flour, wheat starch, maltodextrin, emulsifier, rice flour, and dextrose.  They are 42 percent potato.

Woman Accidentally Steals Car She Thought Was Her Rental