On June 15, a New York judge set aside a conviction on the grounds that the defendant's attorney had provided ineffective assistance of counsel.

For future reference, your lawyer may be providing ineffective assistance if he or she is sleeping or reading health-and-fitness magazines during trial.

Edward Trujillo, Julio Irizarry, and Jonathan Castillo were on trial for weapons charges after an incident in which one of them was (for some reason) shooting a nine-millimeter pistol into the air.  (I suppose the problem with this is that the bullets have to land somewhere.)  Officers found other weapons in the defendants' SUV, and defendants were all indicted on weapons charges.

Irizarry was granted a mistrial based on an evidentiary issue.  Trujillo wasn't so lucky, but he did have another argument.  Under Strickland v. Washington, a criminal defendant's Sixth Amendment rights may be violated if the quality of representation was "below an objective standard of reasonableness."  Trujillo argued this had happened because, among other things, his counsel fell asleep at least three times during trial, read magazines while witnesses were testifying, and "gave a bizarre opening statement that caused the jurors to laugh."  With regret, the judge agreed. 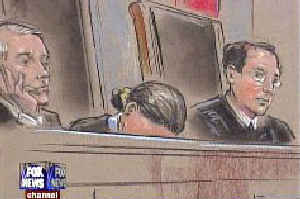 The judge wrote that he had in fact seen Trujillo's counsel "apparently sleeping at the counsel table" at least once.  Saying he was aware that counsel had a "pre-existing medical condition" (he did not identify the condition, or the attorney), the judge noted he had called all counsel up for a sidebar to see if counsel was feeling well and to give him "every opportunity to revive himself, if necessary."  Presumably, counsel said he would try to stay awake, but failed.

The judge also semi-confirmed the magazine reading:  "While the court cannot corroborate defendant Trujillo's claim that counsel was reading a health and fitness magazine during the course of the trial, the court did observe a magazine fall to the floor during the trial proceedings and observed defendant Trujillo's counsel pick up the magazine."  (This would be called "circumstantial evidence" that counsel was reading said magazine.)

Finally, it appears that the opening statement was indeed bizarre, and did indeed cause amusement:

Counsel for the defendant Trujillo did, indeed, give a bizarre opening
statement. The beginning of counsel's opening statement was so off topic and
irrelevant that this court was compelled to stop counsel and direct that he
address what he intended to prove during the course of the trial. The jury was,
in fact, laughing during counsel's opening statement and such laughter at a
member of the bar created an unprofessional atmosphere. . . . [D]uring this trial, I found myself very uncomfortable whenever defendant
Trujillo's counsel addressed either a witness or the jury. It was impossible to
predict what he was going to say.

The judge was clearly reluctant to criticize counsel, likely because of the undefined "pre-existing condition."  That is understandable.  Although it would be more understandable if I could think of a pre-existing condition that can result in an irresistible urge to flip through a magazine while the other side's witnesses are testifying.  (I guess I should not be too critical since I may need to use this someday.)

Anyway, while this probably made the trial much more entertaining than most, the court held that Trujillo had not gotten "meaningful representation," and set aside the verdict.

Mr. Castillo, who was apparently unfortunate enough to have a competent attorney, will be sentenced shortly.