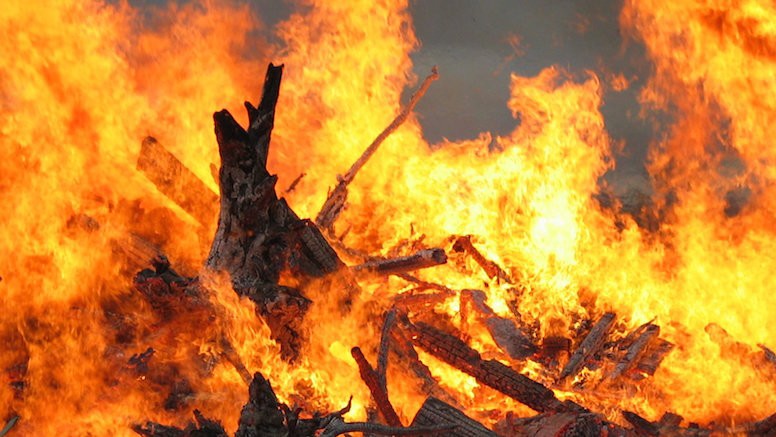 On June 30, the California Court of Appeal held that a man who was burned by the huge bonfire that ends the Burning Man festival each year could not sue the festival organizers.  Anthony Beninati admitted he had intentionally walked into the fire, and that he had previously known fire was hot.  But he argued, basically, that the organizers were negligent because they should not have let him approach the fire so closely.

He did not win.

The defendants argued the lawsuit was barred by the doctrine of “primary assumption of the risk.”  This doctrine bars negligence claims by someone who was hurt while participating in an activity “involving an inherent risk of injury to voluntary participants . . ., where the risk cannot be
eliminated without altering the fundamental nature of the activity.”  To date, California courts have applied this only if the activity is a sport of some kind, although a couple of cases have stretched that definition a bit (unless you think “recreational dancing” and being pulled behind a boat on an inner tube are “sports”).

Generally, walking into a bonfire is not considered a “sport,” so this case squarely presented the question whether the doctrine should apply to anything else.  The court held that, at least on these facts, it did.

Burning Man, as you may know, is an annual week-long festival held in the Black Rock Desert in Nevada.  There is normally nothing at the site, but once a year tens of thousands of people show up and build a small city.  Among the many things they create is the iconic 60-foot-tall wooden statue that is set on fire as the culmination of the festival.  The Burning Man burns until he collapses into a gigantic bonfire, which, apparently, people then throw things into as part of the Burning Man experience.  Beninati was burned while trying to do this.

That is, this man wasn’t just burned at Burning Man, he was burned by the Burning Man himself.

Beninati’s complaint stated that when he approached the bonfire, the flames were still roughly 40 feet high.  He walked around the bonfire three times, each time “circl[ing] a little closer to the fire.”  Eventually, he walked still closer, into what was variously described as an area of “embers,” “low flames,” “burning remnants,” and “a spot where there was fire on either side of him.”  Basically, he had walked inside a huge bonfire.  Then, as you might have expected, he tripped on something and fell into the actual fiery part of the bonfire, burning his hands.

In his deposition, Beninati admitted he knew “fire was dangerous and caused burns” before he walked into one.  He knew there was some possibility of falling into said fire.  He admitted no one affiliated with the defendants asked him to walk into the fire or told him it would be safe to do so.  But he testified that he did not think it would be dangerous to walk into the fire, although he knew it “was not ‘absolutely safe, because there [was] a fire present.'”  And, as noted, fire is hot.

Benenati argued the assumption-of-the-risk defense should not apply because he had not been engaged in a sport.  Some battling legalese followed.  Plaintiff’s lawyer: there is “essentially no precedent for extending primary assumption of the risk to ‘low-impact’ cultural activities of the sort found herein.”  Defendant’s lawyer: “If he had simply stayed a safe distance away from the Burning Man conflagration instead of entering its perimeter, he never would have burned himself.”  Clearly, entering the perimeter of a conflagration would not qualify as a low-impact cultural activity anyway.  I think we can all agree on that.

The court agreed with defendants.  While there is an exception to the doctrine where a defendant has unreasonably increased the risk involved in the activity, the court noted that, here, plaintiff had presented no evidence that defendants had “increased the inherent risk of harm . . . normally associated with entering an area surrounded by fire.”  Case dismissed.

Ride Something Dangerous Down a Hill Today

Legislation Breaks Out During Brawl in South Korean Assembly