A woman in Arlington, Washington, said her husband would not be reporting for jury duty as ordered on June 24, because he had been dead since 2005.

Finally, an absolutely ironclad excuse for getting out of jury duty.

County officials said they did their best to keep the dead from being summoned, but that it was impossible to keep this from happening because the master lists are compiled just once a year, and jury-duty lists are assembled with two to three weeks of lead time.  If a potential juror dies during that time, therefore, he or she may still be called to serve (presumably as an alternate).

The officials acknowledged, however, that the "lead time" explanation did not explain why a man dead for four years would still be on the list.  One insisted that "the probability of something like this happening is not major, if at all [sic]," but did grudgingly concede that the risk of the thing that had just happened was "obviously not non-existent." 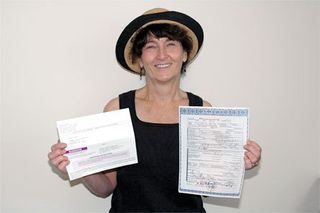 The dead man's wife, shown above looking awfully cheery for somebody who is holding up a relative's death certificate, was amazed that this sort of thing still happens.  And not just partly amazed, either.  "It's totally amazing," she said, "that even with modern technology, we can't manage these records.  If they can't keep track of [dead people], how can they keep track of criminals, or monitor sex offenders?"  Ma'am, this is a nation that didn't get Nelson Mandela off its no-fly list until 2008, so this should not be even mildly amazing.

If you would prefer to try an option other than death to avoid jury duty, you might consider #6 (Bring a Sword to the Courthouse), #4 (Be Mr. T), or #5 (Tell the Judge You'd Rather Count the Wrinkles on Your Dog's Balls than Serve on a Jury).  Warning: At least two of these three carry a significant risk of jail time, but all have been proven to work.

Link: Arlington Times (photo above is courtesy of same)