Nevada's highest court (and its only appellate court) will hear oral argument on August 3 as to whether O.J. Simpson should be allowed to go free on bond while he appeals his conviction for that gun-waving memorabilia negotiation he conducted in 2007.  Bail requests of this kind are relatively rare in Nevada, and oral argument on such a request is virtually unheard of, and so the setting of argument has created quite a buzz of anticipation.

Which is odd, because there is no way in hell that O.J. Simpson is getting out on bail.

As you may recall, Simpson was once tried for the 1994 murder of his wife and another person, and after a lengthy trial, a jury comprised of what had appeared to be conscious human beings acquitted him of those crimes.  Simpson then dedicated his life to looking for the real killers, following a series of clues that mostly appeared to lead him to golf courses and strip clubs.  His search was interrupted by the 2007 incident, which resulted in a 33-year sentence.  Now, Simpson nominally is in the NFL Hall of Fame as one of the league's best running backs, but physically is in the Lovelock Correctional Center as one of the state's new prison janitors.

Everybody seemed to realize that the odds against bail are long.  "I know my burden is high," said Simpson's lawyer, Yale Galanter.  "I know them granting bond would be a really rare thing."  In fact, the odds are "[o]ne in a million," said Howard Brooks, who oversees appeals for convicted indigent defendants in Las Vegas.  Brooks said the high court's rate of reversal in criminal appeals is lower than average to begin with, and that the odds of getting bond were even lower.  The court has denied similar requests by other high-profile inmates, but probably more importantly, it once granted a bail request it lived to regret.

In 1978, the court granted bail to Lawrence Arvey, a defendant who was appealing a life sentence for sex crimes involving minors.  Arvey, who the AP report describes as "a big man and larger-than-life casino figure who wore jogging suits
and big wigs to court," went by a variety of nicknames including "Candy
Man," "Mr. Chin" and "Big Fat Daddy." You would think a nickname like "Candy Man" would be a sufficient reason to deny bail, but the court granted his release on a $100,000 bond.  According to his former attorney, "Nobody thought [Arvey] was a flight risk because in 1978 that was such a large
amount of money." 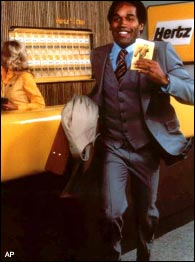 Big Fat Daddy has not been seen since.

Galanter, though, insisted that O.J. Simpson was not a flight risk because he is simply too famous to flee.  "He's got no place to go, no place to hide," Galanter said. "News crews follow him to the restaurant, to the golf course, to school to pick up his kids.
He's truly one of the most recognizable people on the planet."  Maybe so, but I still wouldn't grant bail to a defendant who was once best known for his running ability, including an ad campaign in which he was actually shown sprinting through airports.

One Possibly Unforeseen Risk of Escaping While Handcuffed

Ideas Too Good to Patent