Trying to control stabbings by banning knives that have a point on the end was bad enough.  But this is really going too far.

The BBC reported recently that the British Home Office is seeking a new design for pint glasses that it hopes may reduce the number of incidents in which people attack each other with pint glasses.  According to official statistics, 5,500 people are attacked with glasses and bottles every year in England and Wales.  (Probably more in Scotland, though maybe they just use swords.)  This public safety emergency has spurred the government into action, seeking a design that can't be used as a weapon.

Designers say they are considering two basic approaches: (1) plastic, or (2) something else.  First, glasses could be made from plastic, or could be coated with it so that the glass would not shatter into sharp pieces if broken.  Second, "[w]e could do something more radical," said one designer, "by looking at the whole shape and substance of the pint – we could come up with something that is completely different [from] glass."  Seems a lot like the first approach, and it wasn't clear what he had in mind.  But he continued: "Remember that years ago people used to drink out of pewter tankards.  It could be quite a significant paradigm shift."  That's a great idea – I'd much rather be clubbed to death with a pewter tankard.

Not surprisingly, the British Beer and Pub Association is not in favor of the plan and does not want the new glasses to be mandatory.  "For the drinker," said a BBPA representative, "the pint glass feels better, it has a nice weight and the drink coats the glass nicely. . . . Is it necessary to replace the much-loved pint glass for safety reasons in the vast majority of pubs where there is no problem?"  Yes, said the Home Office Minister.  "Innovative design has played an important role in driving down overall crime," he claimed, though it wasn't clear what innovative design he was referring to, maybe the knives.  "This project will see those same skills applied to the dangerous and costly issue of alcohol-related crime and I am confident that it will lead to similar successes."

This is one of those situations in which the tradeoff between safety and freedom is starkly presented.  Requiring plastic pub glasses almost certainly would prevent some injuries.  On the other hand, somebody who would otherwise be stabbing you with a broken pint glass is probably going to be enterprising enough to find something else, like maybe a pewter tankard, to attack you with.  So in my view, the few injuries that might be prevented do not justify depriving millions of people of the much-loved pint glass. 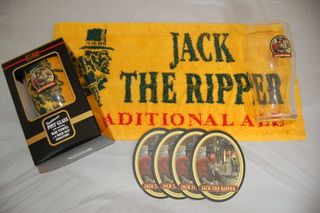 After all, if preventing the maximum number of injuries is the goal, there are other areas that they should probably be more worried about.  For example, according to The Royal Society for the Prevention of Accidents ("RoSPA") – and yes, there is such a thing – seven times as many people (40,000) are injured in pub accidents as are attacked there with current glassware.  Maybe somebody should be trying to shift the bar-stool paradigm rather than tampering with the much-loved pint glass.

In fact, the RoSPA has a great database of statistics as to how people get injured in the UK, and it seems like there is a lot we can learn from that in terms of priorities.  For example:

There are also a number of categories that each involve fewer injuries than are claimed for pint-glass attacks, but which cumulatively suggest that some sort of urgent action is needed in England.

A RoSPA spokesman commented that the statistics are relative and that there may be perfectly good explanations for some of the odd ones.  "It seems odd," he said, that "there are so many more accidents involving trousers [5310] than chainsaws [1148], but everyone has trousers and hardly anyone has chainsaws."  I think that makes sense.