As you have probably heard, things are going just great in California, apart from the state being massively in debt, occasionally on fire, and thoroughly riddled with active fault lines.  Also, our bridges suck, but on the bright side, the state government is pretty much dysfunctional.  Maybe this is making everybody especially tense right now.  That doesn't really seem to justify trading childish insults, but at least this is providing some amusement as our burning state slowly sinks into the Pacific.

Not long ago, one of San Francisco's city supervisors, Tom Ammiano, told Governor Arnold Schwarzenegger to "kiss my gay ass" as Ammiano was walking out of a meeting that had gotten especially testy.  (Ammiano, who also works as a stand-up comic, could probably have come up with a better line, but time was short.)  Of course, it's his right to say whatever he wants to the Governor, but doing this probably does raise the odds of a veto if you have any legislation pending.

That's what happened with AB 1176, which Ammiano had sponsored and which the Governor vetoed recently.  He also sent along a veto message, something that governors often do, but this one had an interesting combination of letters along the left side of the two main paragraphs: 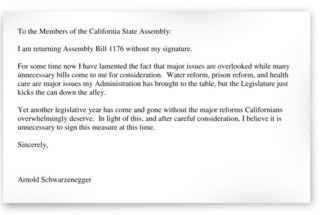 When this came to light (it didn't take long), a spokesman for the Governor said the arrangement of letters was just "coincidence."  I wondered how likely that really was, so I emailed my Internet friend Steve Kass, a math professor who I have Internet-known ever since he (correctly) mocked my math skills after I got something wrong in a prior post.  I asked him if he could figure out, using his math-professor abilities, what the odds were that these two words might actually appear at random.  He calculates that the chances of this would be about one in 2.1 billion, although it clearly depends a lot on the starting assumptions:

Turns out I was not the only one to have this idea yesterday, by any means.  Those wiseguys at NPR thought of it, too, and contacted a Prof. Robert Lewand from somewhere called Goucher College for the same purpose.  Lewand calculated that this would happen at random 5.5 times for every one trillion veto messages sent, or in other words (I think) that the odds would be something like one in 200 billion.  The difference may be due to what Lewand (who is also a cryptologist) said is the relative rarity of words that start with "k" in the English language, but he didn't explain in detail.

I would leave the "i" out of the calculations, mainly because I seriously doubt that was part of the message Schwarzenegger intended to send Ammiano.  That I do believe was a coincidence.

Other estimates floating around are all over the place.  I will stick with Steve's, mainly because I like the idea that if you asked all human beings to write down eight randomly selected lines of English text with two blank lines separating those lines into three groups, on average three of them would in fact write something that happened to spell out "F*CK YOU."  Now, what are the odds that (assuming we did this) one of those three would just happen to be the governor of California?  Hard to say, but as Steve notes, the one thing everyone agrees on is that it is really unlikely that this was not done on purpose.

By the way, there are no hidden messages of any kind in this post.  I just don't have the time to come up with something that spells out "AMMIANO AND SCHWARZENEGGER SHOULD BOTH GET BACK TO WORK BECAUSE OUR STATE IS FALLING APART," although I would dearly love to be able to give that a shot.

Where Not to Flee After Robbing Someone, #174

Battle of the Bigfoot Researchers