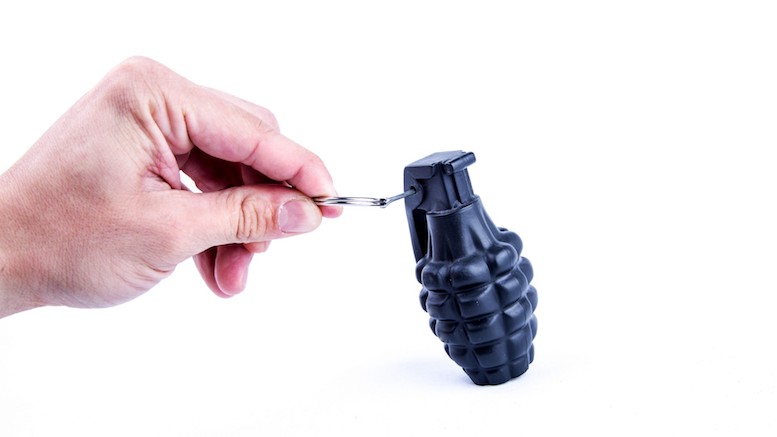 Ladies and gentlemen of the jury, I ask you to count to three

“I was trying to demonstrate what’s called an imminent threat,” said Sam Kepfield, an attorney in Hutchinson, Kansas. He was trying to explain why he put a hand grenade on a courtroom table and pulled the pin during his closing argument.

The grenade wasn’t live, but this still seems like a bad idea.

That, I assume, is why Kepfield originally set the grenade on a ledge in front of the jury box, before moving it over to the prosecutor’s table and setting it in front of the assistant DA, Amanda Voth. According to the report, Kepfield then “pulled the pin from the grenade and asked jurors, ‘Are you afraid now?'”  Voth did not object to the grenade sitting in front of her, saying later that she had been too surprised to do so, and the judge simply told Kepfield to get the grenade off the table.

The jury deliberated for a full 15 minutes before finding Daily guilty.  But who knows? In the absence of Kepfield’s dramatic closing gambit, it might only have been 14.

The report did not make it very clear as to who besides Kepfield, if anyone, knew the grenade wasn’t real. “It was a dud, and they knew it was,” he was quoted as saying, but he didn’t say who “they” included. It didn’t include Voth, but Kepfield accurately pointed out that he is not “under any obligation to clear my closing arguments” with the district attorney, even if they involve grenades. Presumably one or more court security personnel knew that the grenade wasn’t real (or else they need new court security personnel), but if so the local sheriff’s office wasn’t accepting that as an excuse.

Capt. Wayne Baughman noted that it is illegal for anyone other than authorized law enforcement personnel to bring even simulated weapons into a courtroom, citing the Kansas statute on “criminal use of explosives.” Kan. Stat. § 21-3731. Subsection (a)(2) of that law does make it a felony to possess, create or construct “a simulated explosive, destructive device, incendiary, radiological, biological or poison gas, bomb, rocket, missile, mine, grenade, dispersal device or similar simulated device, with intent to intimidate or cause alarm to another person.”

The jurors reportedly told the judge that they had not been alarmed. They probably assumed the grenade wasn’t real, but it seems safer to not assume that kind of thing. Still, under that law it doesn’t matter whether they were actually alarmed. And given Kepfield’s admission as to what he was trying to do with the grenade, and his question to the jury right after he pulled the pin, he may have some trouble arguing he didn’t have the necessary intent.

Asked whether the grenade stunt had frightened her, Voth “laughed and declined comment.”

Update: In December 2009, the Hutchison News reported that the sheriff’s office had completed its investigation of the incident and turned the case over to prosecutors. So far as I can tell, though, no charges were brought.