I am busier than I expected today, mostly because I was apparently the only one stupid enough to actually come into the office on December 31.  But I did want to post one final post of the year, although, as you know, time divisions like "years" and "months" and "tenths of an hour" are wholly arbitrary and so any dividing line or other distinction between them is equally arbitrary.  (Feel free to give me the Nobel Prize for that.  They seem to be easier to get now than they used to be.)  Having said that, I am arbitrarily picking today to treat as the last "day" of the current "year," and if anyone else happens to do the same thing I'm going to drunkenly insist that it is entirely coincidental.

I am not yet doing a "top ten" list, although everybody else seems to have done that already, because even assuming that it made sense to treat 365 1/4 "days" in a row as some sort of unit, it makes no sense to pick the top ten events of that unit until the unit is actually complete.  I mean, what if you publish your list and then ten really great (or, more likely, really stupid or weird) events happen during the last few arbitrary time periods of the unit?  Then what?  Huh?  Then what?!

So I am doing mine next week.

This is consistent (I just checked) with my practice from last year, when I did manage to get the 2008 Lowering the Bar Awards released on January 2, 2009.  Hopefully the 2009 edition will be out next week.  Also, you will be able to see a more complete list of lowlights of the past 12 months by simply turning your eyeballs toward an upcoming issue of The Green Bag law review and letting your retinas collect the light reflected from my article, "A Year of Lowering the Bar," which the Bag will be publishing in what you call "2010."  (Because of the lead time required by the publishers, that year actually runs from October 31, 2008, to November 1, 2009, which I think supports what Einstein and I have been saying about time all along.) 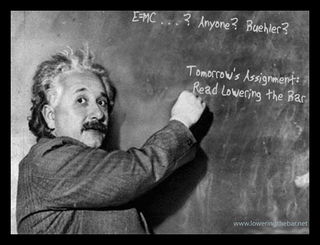 "Mr. Underhill actually does not understand my work very
well," said Einstein, "but then I was a f#@%ing genius."

This is also a perfectly good (if completely arbitrary) time to thank you for reading this blog.  By the time most of you have been bailed out of jail tomorrow morning, the pageview counter for the last 12 months should have hit 920,000.  (It still might hit one million if you crystal-meth users would step it up a bit.  Staying in and reading would be a lot safer than going out there where the spiders are.  Just a suggestion.)  That is about twice what it was last year, and those pages don't view themselves, so thank you very much.  I hope you have enjoyed it.  Also, thanks to those who sent in stories or documents.  You generally (and wisely) wish to remain nameless, but you know who you are.

Finally, I'll leave the warnings about drinking and driving tonight to others who you are more likely to take seriously, but you should also remember that, as frequent readers may recall, that the definition of "vehicle" for DUI purposes has been interpreted very broadly to include, for example, horses, riding mowers, Zamboni machines, motorized beer coolers, and maybe most conspicuously, 40-mph bar stools.  If you must drink and drive, let it be on a Zamboni (top speed 3 mph), I guess, but unless you have one of those handy, don't.

Thanks again and Happy New Year.