Seems like there is always some humor in store anytime an animal shows up in court.  I guess there was that one time it didn't go so well: 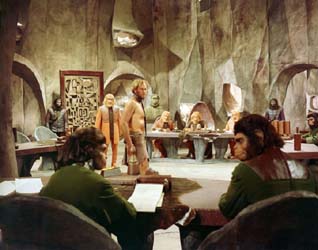 Even then, though, the chimpanzees were kind of funny.  (It's those friggin orangutangs you gotta watch out for.  Jerks.)  So when I see a headline that includes the phrase "chimp in court today," I'm probably clicking on it, especially if the phrase "at center of custody battle" is in there too.

According to the report, which unsurprisingly involves Florida, Eli the chimp was in a Sarasota courtroom today because he is, yes, at the center of a custody battle between a man from Missouri who says Eli was born on his chimp farm and a Sarasota woman who claims he is really from California.  (In other news, there is apparently a chimp farm somewhere in Missouri.)  Today's hearing reportedly had to do with a DNA test that may settle the question.

The report includes this sentence: "Attorneys say there has not been another case in Florida involving the paternity of a chimpanzee," although somehow that seems unlikely to me.