According to a study by online insurance company insurance.com, attorneys (including judges) are at the very top of the list of most dangerous drivers, a result that a company spokesperson suggested was because of their mistaken belief that they are better at multitasking than those in other professions.

Personally, I always accept the results of studies by online insurance companies at face value, but for those of you who are skeptical, the company said the findings were based on the percentage of people seeking a comparison quote via its website who reported they had made at least one accident claim in the past.  In order, the top ten most dangerous by this measure were attorneys or judges, financial professionals, government workers (specifically GS-6), bartenders or waiters, business professionals, dog groomers, marketing/advertising professionals, barbers or stylists, coaches, and nurses.  The least dangerous (or least likely to report) were athletes (17 percent) and homemakers (24 percent).

The report did not say how large the data set was or how the company might have controlled for the many other possible variables.  For example, attorneys and judges may just be more likely to report prior accidents honestly.  No?  Okay, maybe they are more likely to report because they tend to have more expensive cars, or enjoy filling out reports more than others.  Hard to say.  The company suggested (speculated, really) that the reason attorneys and professionals in general do so poorly is that they are in professions that "demand multi-tasking – being on the phone, moving fast on a tight schedule – [and so] are prone to more distractions and . . . more accidents."

If that's true, though, it does not explain why dog groomers are apparently such lousy drivers, unless that is a much more demanding profession than I thought.  If these people are shaving more than one dog at a time while driving, they should stop.

The new study is mostly consistent with a 2006 report by the same company that ranked occupations by the average premium paid.  You would expect the safer-driving professions to pay less, and that was generally the case.  According to that report, the attorney/judge classification paid an average of $1,370.39 per year, 61st out of the 63 occupations ranked (that is, two from the bottom), while athletes and homemakers were 14th and 15th respectively.  Business professionals, government workers, and nurses were near the bottom, too, but "breeder/groomer/trainer" (sixth most dangerous this year) was much nearer the top of the 2006 list, paying an average of $1102.83 (17th-lowest).

The cheapest premiums were paid by scientists, who could get coverage for less than retired, disabled, or unemployed people, and even less than students. 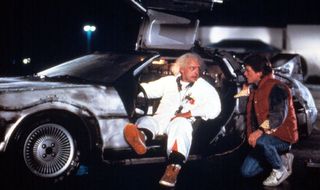 You pay how much less than me, Doc?

Having seen how some scientists drive, though, I'm inclined to think there's something seriously wrong with this study.