According to the New York Times, some of the "Mardi Gras Indians" have been registering copyrights in the "ornate, enormous, feathered costumes" they make themselves and wear three times a year on special occasions in New Orleans.  These can cost upwards of $10,000, and the "Indians" say that they are tired of seeing their pictures used on calendars, posters, and whatnot, and not getting any money in return. 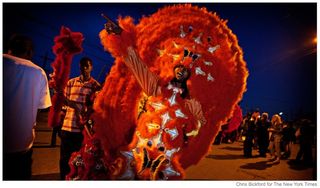 Since they realize they almost certainly do not have any rights in the pictures themselves, which they are more or less giving away free as a result of walking around in ornate, enormous, feathered costumes asking to be photographed, they have decided to try copyright law.

An expert quoted by the Times said that clothing is generally not copyrightable, but the Indians' costumes are "pretty wild and not functional in the ordinary sense of the word," so they might be different.  "That said," he continued, "lots of runway fashion is also way out there and not likely to fit anyone's ordinary idea of usefulness, yet it doesn't receive copyright protection."  (But maybe that's because nobody wants to have a written record that they actually came up with, or paid for, outfits that look so incredibly dumb.)  The Indians' lawyer, Ashlye Keaton, who I assume spells her first name that way on purpose to make it harder to duplicate, argues that the suits should be considered analogous to protectable works of sculpture rather than clothing, especially given that some of them can weigh well over 100 pounds.

A photographer who has been taking pictures of the Indians for decades said that there probably was not much point to the copyright battle, given the relatively small amount of money he makes from the pictures.  They may not want to be exploited, he said, but "[w]hat they really need to do is self-exploit."

Don't get me wrong — I think the costumes are a fantastic tradition that should be encouraged and is probably a sufficient reason all by itself to save New Orleans.  But sometimes you just have to do something because you love it.  Sure, I make millions from blogging, but I'd do it for free.  (Let me know if you want to buy an ad here, though, and I could donate that money to children or something.)

Also, they probably need to be a little careful how far they push this.  It appears that the "Mardi Gras Indians" in fact are mostly if not entirely African-American, so if they did start making money from copyright they might end getting themselves sued by actual Indians for misappropriating the name.  On the other hand, those "Indians" were never from India to begin with, but that confusion is some Italian's fault, so there are two more lawsuits waiting to happen.