Thirty-one-year-old Chris Jarvis was escorted out of a government office in the UK recently for refusing to remove his hood, which a spokesperson said visitors must do for security reasons.  Jarvis complained to the Department for Work and Pensions, on the grounds that as a member of the International Church of Jediism he is required to wear a hood, just as Obi-Wan did.

This actually got him an apology a few days later.  "We are committed to provide customer service which embraces diversity and respects' customers' religion," said Wendy Flewers.  She said this in a separate sentence from the actual apology, which suggests a certain reluctance to admit that Jediism really is a religion at all.  Jarvis milked it, though.  "I was just standing up for my beliefs," he told The Sun.  "Muslims can walk around in whatever religious gear they like, so why can't I?"  Not sure where to start on everything that's wrong with that statement, except maybe to mention that at least Islam is not based on a series of six movies, four of which sucked.

Those who follow the Way of the Force complain that anti-Jedi discrimination is common.  Jedi church founder Daniel Jones, who goes by the Jedi name "Morda Hehol" when he is outside his parents' basement, was kicked out of a Tesco supermarket in Wales last year, also because of his hood.  He reportedly made an official complaint and sought legal advice, although so far as I can tell he has not yet sued.  Jones said he told the manager and employees that the hood was "part of his religion," but said they were "uncooperative."  "They weren't listening to me," he whined. "They wasted my personal time. They were rude and not very nice to me." Jones also claimed he felt "emotionally humiliated" and physically threatened.  "They had three people around me.  It was intimidating," blubbered the representative of a religion allegedly modeled on the acts of heroic warriors known to have fought hundreds of enemies at once. 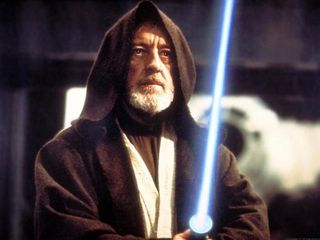 If you strike me down, I shall become more
whiny than you can possibly imagine

And though the Jedi almost always prevailed, Jones got his ass thoroughly kicked (verbally) by, of all people, a corporate spokesperson.

"He hasn't been banned," explained a Tesco representative, who confirmed the chain had nothing against the Force.  "Jedis are very welcome to shop in our stores," he said, "although we would ask them to remove their hoods."  On that point, the company noted that Jones seemed a little unclear on his own mythology.  "Obi-Wan Kenobi, Yoda, and Luke Skywalker all appeared hoodless [in public] without ever going over to the Dark Side," the spokesperson continued, "and we are only aware of the Emperor as one who never removed his hood."  Impressive, but the final blow was still to come:  "If Jedi walk around our stores with their hoods on, they'll miss lots of special offers."

The victorious Tesco warrior then prodded his opponent's Jedi robe with his lightsaber, which made Jones whine some more because he was still in it.

Link: The Register (on the Jarvis case)
Link: The Sun (same, calling it "The Spurn of the Jedi")
Link: Daily Mail (on the Jones case)

Though in Contempt (and Contemptible), Joe Francis Still Wins

Missing Man Found in Search Party Looking for Himself