In my opinion, mapping software paired with GPS technology is one of the more remarkable developments of the modern age, but you know what?  You do still need to look where you're going occasionally.  Please remember this if you are out for a walk this fine Memorial Day.

Lauren Rosenberg was not aware of, or forgot, this important detail, and so when Google Maps offered her these directions — 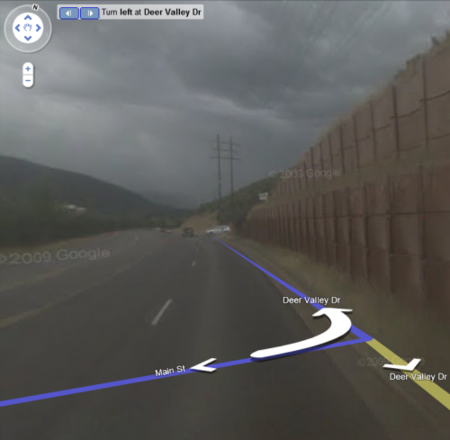 – she tootled right along, on foot, onto and along the highway, where she alleges she was hit by a car.

Rosenberg's lawsuit names the driver of the car that hit her as a defendant, which makes sense, but also names Google, alleging it was negligent in steering her onto said road and failed to warn her of the dangers that might be encountered there, to wit, cars.  This complaint pretty much speaks for itself:

24.  Defendant Google, through its "Google Maps" service provided Plaintiff Lauren Rosenberg with walking directions that led her out onto Deer Valley [Road], a.k.a. State Route 224, a rural highway with no sidewalks, and a roadway that exhibits [sic] motor vehicles traveling at high speeds, that is not reasonably safe for pedestrians.

28.  As a direct and proximate cause of Defendant Google's careless, reckless, and negligent providing of unsafe directions, Plaintiff Lauren Rosenberg was led onto a dangerous highway, and was thereby stricken [sic] by a motor vehicle. . . .

31.  Defendant Google knew or should have known that Deer Valley Road . . . is a rural highway exhibiting vehicles traveling at a high rate of speed, and devoid of pedestrian sidewalks, yet Defendant Google instructed Plaintiff Lauren Rosenberg to use that road for her pedestrian travel . . . .

What was Plaintiff Lauren Rosenberg to do?

Google should not have to warn people to use common sense when using its maps, but it does, telling people to "use caution" because certain routes "may be missing sidewalks or pedestrian paths."  According to the report, however, this warning does not appear on maps reached from a BlackBerry, which Rosenberg was apparently using, because the screen is too small.

I expect to see an amended complaint shortly naming Research In Motion as an additional defendant.