I somehow failed to notice that the Peeps eviction case had gone to trial in Boulder, Colorado, but I have now learned that the trial ended in a verdict for the landlord.

As you may recall, Carol Burdick had alleged she was constructively evicted from her apartment in May 2009 after she got into a dispute with her landlord over a marshmallow-Peeps Easter diorama she had stuck to her front door.  The parties disputed whether the diorama was art (Burdick's position) or trash (landlord's position), as well as whether Burdick had been threatened with eviction because of the Peeps or because of her failure to pay rent.  Burdick admitted she stopped paying in protest over the Peeps issue, but argued that the landlord breached the lease first.  The dispute ended up in a Boulder County courtroom on June 22. 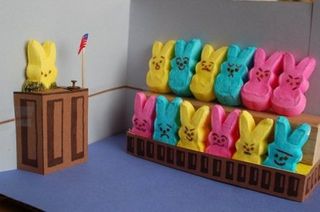 A Jury of Her Peeps
(Photo: ABA Journal—Peeps in Law)

The Boulder Daily Camera's coverage of the trial was quite extensive.  An item that ran on the first day of trial described each of the six jurors (not 12, as depicted above) who had been chosen to decide the case, as well as two of the excused jurors (one of whom reportedly called the case "silly," if you can believe that).  It then summarized opening arguments.  Burdick's attorney, John Pineau, argued to jurors that the case was "infinitely deeper and more fascinating than it appears on the surface," which might have been overselling it just a bit.  He said it was unfair that Aimco had precluded the Peeps display in the absence of a more specific lease provision about decorations.  "This is America," he said.  "We get to do what we want until we're told that we can't."  Yes, that was the first draft of the Bill of Rights but they decided to get a little more specific.  Aimco's attorney, Jon Sands, stuck to more basic principles.  "It's really not about religion or faith or principle or Easter or Peeps," he said.  "This is a case about a tenant who didn't pay her rent."  As for the "art" claim, he suggested that "one person's artwork is another person's mess."  The rest of that day was devoted to the apartment manager's testimony, during which Pineau moved that a box of yellow Peeps be admitted into evidence.  "I have no objection to the Peeps," Sands said, after inspecting them.

The next day, Burdick took the stand.  She claimed, among other things, that the eviction notice had really been in retaliation for complaints about the condition of her appliances, and that other tenants had similar decorations on their doors but had not been harassed.  When she finished, her attorney next called a former art teacher who would have testified about the use of Peeps as a "legitimate medium" for art, but the judge decided that was irrelevant.  He also excluded, on the same grounds, testimony by some guy who had won a Peeps diorama contest.

The judge did, though, allow testimony by Andrew Novick (left), a "self-described Peeps expert" and collector who hosts an annual Peeps-themed barbecue.  (Another interesting detail is that Novick was apparently once the lead singer of a Denver punk band called the "Warlock Pinchers.")  Novick was apparently called in part to rebut Aimco's claim that the marshmallow Peeps might have tended to attract insects after a month of being on the door.  "I have a lot of Peeps that I've had around for years," Novick testified.  Over time, he said, "[t]hey become hard and kind of crunchy.  I've never seen any bugs infest Peeps."  After this dramatic testimony, Burdick rested her case.

It appears that Aimco did not call any witnesses on its own behalf, which may be unsurprising given the lineup for Burdick.  The jury thus got the case that day (the 23rd), but could not reach a verdict.  After four more hours of deliberation on the 24th, it reached a verdict for Aimco, but basically split the baby by awarding the company just half the back rent it had been seeking.  The company said it would not ask Burdick to pay its attorneys' fees, only court costs, but we shall see.

An Aimco spokesperson said it was "very pleased" with the verdict, and that it takes its relationship with its tenants seriously.  "We want our residents to feel as if an Aimco apartment is their home," she said, which is nice, because it pretty much is their home, as long as they're paying rent.  Burdick, meanwhile, was said to be "visibly dejected" after the verdict was read, while her attorney said he was "committed to an appeal," both of which are kind of ridiculous.  "It was worth every funny and serious moment — every sleepless night," Burdick told a reporter, appearing quite thoughtful and somber about a case that revolved around marshmallow Peeps.  One of the jurors told the reporter they, too, had taken the case seriously.  "People's lives aren't silly," she said.  "Obviously, to them, it was important."  I agree with that second thing.