Yukio Hatoyama, who resigned on Wednesday from his job as the prime minister of Japan, has tweeted supporters to let them know of his decision and to ask that they continue to follow him on Twitter.

"I announced my intention to resign as Prime Minister today," Hatoyama said, at least according to one translation of his final official tweet (left), "in order to make the Democratic Party [of Japan] clean again for the sake of the people.  From now on I will stop being PM but want to continue to tweet as a normal person.  Please keep following me."

That is one translation, but I actually like Google's better: 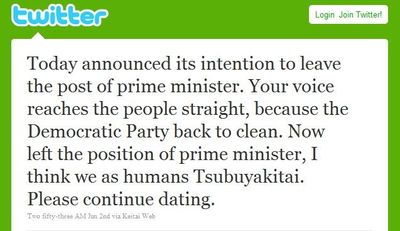 It is a little disturbing to think that the Japanese term for "dating" also translates to "following me," so I'm going to blame that one on Google Translate.

Hatoyama was reportedly an avid Twitter user, although as of Friday he had only tweeted 184 times.  He did have a total of 676,063 followers, which is quite respectable especially considering that he was only in office for eight months.  Given the recent slide in Hatoyama's approval ratings, it is entirely possible that he has more Twitter followers in his camp than voters at this point.

Opinions vary on what it was that led to Hatoyama's downfall.  Some say it was indecisiveness and his eventual failure to keep campaign promises to remove the American base from the island of Okinawa, something that angered many Japanese. Some point to financial scandals involving political contributions — when it came to light that his mom had been contributing millions to his campaign, he claimed that was the first he had heard of it.  Others say it was this shirt.

Hatoyama was widely mocked for this shirt, which he wore to a barbecue in April. One critic (granted, it was a fashion critic) said the shirt demonstrated that Hatoyama's "ideas and philosophy are old [like his shirt] . . . . Japan is facing a crisis, and we can't overcome it with a prime minister like this."  The link between shirt choice and governing philosophy is not entirely clear, but neither this nor the white shirt with red hearts worn under a pink blazer – another poor fashion choice he made – could have helped Hatoyama's image any.

The party has already chosen another leader, so this does seem to be the end of the Hatoyama saga.

Court: Not Prejudicial to Feign Sleep During Defense Argument