On June 20, the town council of Sullivan’s Island did indeed pass the proposed noise ordinance I mentioned the other day, meaning that it is now officially illegal to hoot, yell, shout, whistle and/or sing at any time “so as to annoy or disturb the comfort or repose of persons” on Sullivan’s Island, South Carolina. 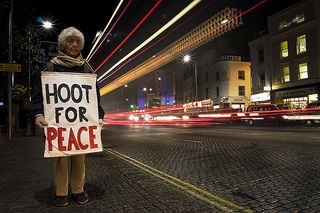 Not on Sullivan’s Island, lady

Also, don’t forget that (among many other things) playing a piccolo in an unreasonably disturbing manner was specifically prohibited even under prior law. (I’m not sure how someone might do that, to be honest, and I’m not sure I want to know.)

The mayor of Sullivan’s Island was quoted as saying that the law was not intended to stop people from “having fun,” conceding that those enforcing the law would have some difficult judgment calls to make. “Obviously if I am singing in this tone, that wouldn’t be a problem,” he said, apparently singing those words in some way he considered non-disturbing, although sadly there was no video clip of him doing this. “But,” he continued, probably talking normally, “if 5 or 6 or more people are out singing drinking songs at 2 o’clock in the morning that’s a problem.”

Please be advised that unlawful hooting may result in a fine of up to $500.