Taiwan's Intellectual Property Office said it had disqualified Wu Chih-wei and asked him to return the medal and prize money he got for winning the "Protect Copyright" poster-design contest, after Wu admitted he had copied the design he submitted.

"The contest's purpose is to make the public respect the intellectual property of other people," the office said in a statement. "If someone copies other people's work to join the contest, it runs counter to this purpose." Yes it does.

Wu had won the student division of the contest with a design showing a paper airplane made out of a book page falling out of the sky as letters trail off the page like smoke. Called "Work — Shattered," the image was a dramatic metaphor for the harm that can be done by unauthorized copying.

It was also copied from the work of Dutch artist Dennis Sibeijn, specifically an image called "Truth." 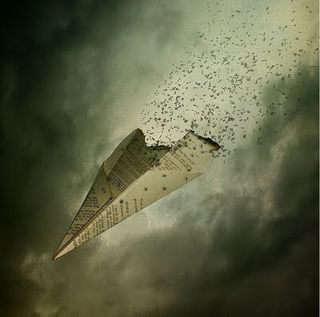 The IPO was unaware of the copying until someone contacted it to tell it that the image being used for the anti-infringement campaign had been stolen. Wu admitted the work was not original and said he needed the money. The IPO has asked him to return the approximately $156 he had been awarded.