Speaking of the U.S. Marshals Service (did you buy some of Bernie Madoff's crap from them this weekend?), another of the service's programs has also proven wildly popular. Five years ago, the service started "Fugitive Safe Surrender," a program that allows people wanted for nonviolent crimes to surrender in exchange for favorable treatment, meaning they can usually avoid jail time. A Safe Surrender program in Franklin Somerset County, New Jersey, turned out to be one of the most successful ever, with 3,901 people turning up, twice the expected number, over a four-day period.

In fact, this was such a successful event that 550 people showed up who had not done anything wrong.

Or, at least, there was no warrant out for their arrest. I imagine some awkwardness followed:

"Oh, uh, nothing. Sorry, I had myself confused with someone else."

That apparently happened about once every five minutes for four days. 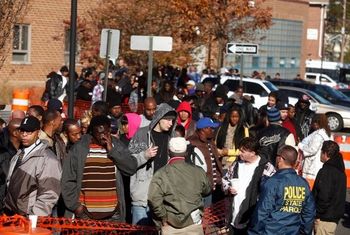 The turnout in Franklin Somerset County was the fourth-highest among the 25 cities that have hosted Safe Surrender programs to date. Only Cleveland, Detroit, and Newark had higher numbers of uncaptured miscreants: 7400, 6600, and 4100 respectively. Even assuming 14 percent of those people also showed up unnecessarily, that's still a lot of closed cases.

Can the President Kill a U.S. Citizen in the U.S. Without Trial? Attorney General Says Yes

“Too Drunk to Remember” Excuse Deployed by Federal Judge