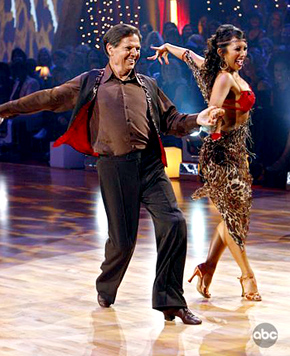 About this time last year, Tom DeLay was doing this (right).

If he is doing anything like that next year, his partner could be significantly less attractive.

On Nov. 24, DeLay was convicted on conspiracy and money-laundering charges that have been pending for years. Texas law prohibits corporate donations to political campaigns, and a state jury found DeLay had broken that law by funneling corporate money through his PAC and the National Republican Committee. DeLay apparently argued that the money the candidates received had not been “laundered” because it was “not the same money” he started with, a defense that I think would have rendered all money-laundering legal, and one that the jury rejected.

DeLay also contends that his prosecution was politically motivated and an “abuse of power,” and told the New York Times that “[t]he criminalization of politics undermines our very system.” He might very well be right about all that, but I assume he said this to a print reporter so he wouldn’t be on camera when he then started howling with laughter. I mean, I just checked again to make sure Tom DeLay was actually in Congress when Bill Clinton was impeached for lying about his sex life, and not only was he around, he was House Majority Whip at the time. When does he think our very system got undermined? Last month?

His most recent public appearance prior to the courtroom was on “Dancing With the Stars,” a contest in which he also did not prevail. “It would be [more] interesting to see if Mr. DeLay can do the Perp Walk,” a long-time opponent said when the DWTS gig was announced. “Does he know that step?” Maybe now we’ll find out.

But probably not. While DeLay could reportedly get up to 99 years in jail for this (which does seem a bit much), some reports have said it is not unlikely that he will just get probation. As long as the terms of that probation forbid him to wear that vest again, I’d be okay with that.