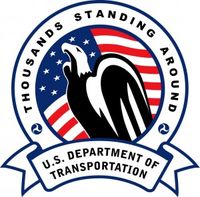 A former TSA officer got three years' probation last week for stealing things out of the luggage he was supposed to be screening. Well, I guess he was screening them, he was just screening them for loot.

According to a federal prosecutor, Troy Davis "put the luggage through special machines to see whether there was [sic] any explosives or anything of concern in the luggage . . . . When he saw that there was something of value in the luggage, he took out the computers or the games." Davis stole five laptops and a Playstation before he was caught. I assume these "special machines" were the ones they use on checked baggage, unless he was just taking stuff out of travelers' bags while they were distracted due to being groped by a co-conspirator.

Yes, it's pretty much all good news on the security front just as another holiday travel season is looming. Security lines are longer than ever, at least partly due to "enhanced" security measures that do no goddamn good at all. Sources last week were reporting a story about a businessman who "didn't intend to bring a loaded gun on a flight out of Houston and can't understand how TSA screeners didn't catch it." Oops. Turns out that happened last year, but as one report noted, things aren't getting better:

Experts say every year since the September 11 attacks, federal agencies have conducted random, covert tests of airport security. A person briefed on the latest tests tells ABC News the failure rate approaches 70 percent at some major airports. Two weeks ago, TSA's new director said every test gun, bomb part or knife got past screeners at some airports.

Every one. Maybe they are missing these things because they are too hot and bothered about seeing people naked, but I guess the good news there is that while they are looking at their new scanners, they will at least see any bombs, knives or guns that the person may be carrying:

It is very likely that a large (15-20 cm in diameter), irregularly-shaped, cm-thick pancake [of plastic explosive] with beveled edges, taped to the abdomen, would be invisible to this technology, ironically, because of its large volume, since it is easily confused with normal anatomy. Thus, a third of a kilo of PETN, easily picked up in a competent pat down [usually not done if you agree to be scanned], would be missed by backscatter "high technology." Forty grams of PETN, a purportedly dangerous amount, would fit in a 1.25 mm-thick pancake of the dimensions simulated here and be virtually invisible. . . . It is also easy to see that an object such as a wire or a box-cutter blade, taped to the side of the body, or even a small gun in the same location, will be invisible.

Finally, given the huge amounts of money and effort already expended on airport security procedures that violate your rights and don't work, it just makes sense that the next step would be to extend those procedures to all our other means of transportation, like buses and subways.