Is it better or worse to know that airport security in other countries can be as stupid as ours? I can't decide.

A Canadian couple that visited the Royal Signals Museum during a trip to the UK said that officials at Gatwick Airport disarmed the souvenir figurine (a soldier with a radio and rifle) they bought at the museum and made them mail the figurine's weapon home separately. The couple said officials became concerned after scanning the box and saw what they apparently thought was a tiny terrorist hiding inside. According to Ken Lloyd, the antenna of the figure's radio set "was individually scanned as suspect" and when the officer conducting the search saw the figure was carrying what she described as a "firearm," she contacted her supervisor. 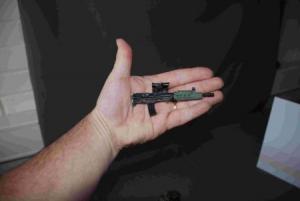 Though non-functional, the mini-SA80 rifle could
be used by a terrorist to poke someone in the eye

Officials refused to let the Lloyds travel with the three-inch weapon, so Mrs. Lloyd brazenly carried it through the airport to a store where she was able to buy a padded envelope to mail the item back to Canada. Mr. Lloyd found it remarkable that his wife was able to move through the terminal at will despite openly carrying a firearm. "The numerous security people sitting around the concourse didn't leap to their feet as she passed," he noticed. The airport's customer-service department agreed to mail the item for them, after x-raying the envelope.

A museum spokesman quoted in the report said that the museum "takes security very seriously" but that this did seem "more than a little excessive." "It's probably just as well we didn't sell her a toy tank," he said.