After I noted that a U.S. Supreme Court justice had said in an interview that the Equal Protection Clause of the Fourteenth Amendment doesn't apply to women (hint: it wasn't Ginsburg, Kagan or Sotomayor who said this), someone wrote me to ask why, if it was intended to apply to women, it took another amendment to guarantee women the right to vote.

For one thing, an amendment might be proposed even if existing law arguably did create or protect a particular right, just for the purpose of getting people to stop arguing about it. After all, that's basically the reason the Bill of Rights was proposed in the first place, over the objection of men like Hamilton who thought it was unnecessary and potentially too limiting. But it was passed, and since that day, as you know, there have been no arguments at all about any of the rights listed in it.

Another potential problem was that the Fifteenth Amendment had specifically prohibited denying the vote to any citizen "on account of race, color, or previous condition of servitude." That could be, and was, read to imply that denying the vote on account of sex was totally cool. That didn't preclude the states from allowing women to vote, and many of the states did. But many didn't, thus the need for another federal amendment — according to some.

All of which is really a lead-in to this item, said to have been published in 1915, which shows that at least some women didn't want the right to vote, because, they said, they did not want the "burden of politics" thrust upon them by the enemies of civilization: 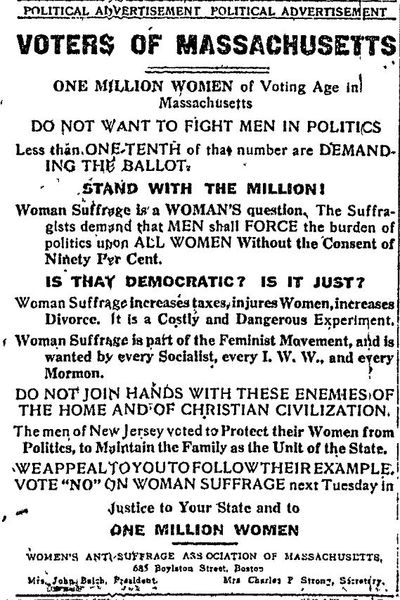 Clearly, women's suffrage was a diabolical plot by Feminists, Socialists, Organized Labor, and worst of all, the Mormons; it was bravely opposed, however, by the Men of New Jersey.

Turns out the "Women's Anti-Suffrage Association" was not made up entirely of men, as I had assumed. This book of "Anti-Suffrage Essays" contained comments by some female anti-suffragists — they were gloating about the defeat of the bill mentioned in the flyer — and included essays by both women mentioned in the flyer (and some who, scandalously, even used their own first names). One wrote that women are simply "not fitted for government either by nature" or experience, and in fact that "[i]n all departments where the law is to be applied and enforced, woman's nature forbids her entrance." That was not quite consistent with Mrs. John Balch's statement that the female membership of the Association was made up of "not only the very large group of homemakers," but also some women lawyers, who I guess had missed the memo about practicing law not being in their nature.

According to the Library of Congress, there were indeed women lawyers at the time. The first woman to be admitted to a state bar was Belle Mansfield, admitted in Iowa in 1869. The first African-American woman was admitted to the D.C. Bar in 1872 without objection, not because D.C. was enlightened but because she applied under the name "C.E. Ray" and the committee assumed she was a man. (The descendants of those people now work for the Department of Homeland Security.) And there were some in Massachusetts, although according to one of them (writing in 1890), not very many:

And this was so short a time ago, — for the woman lawyer in the abstract has not yet attained her majority, — that the novelty of her very existence has scarcely begun to wear off, and the newspapers publish and republish little floating items about women lawyers along with those [about] the latest sea-serpent . . . .

My sense is that things are somewhat better now for women lawyers, though obviously there is still a lot of room for improvement. Sea-serpents still get no respect at all, but that will have to be a fight for another day.

Prosecutors* Try to Drop Charges Against Themselves