If you enjoy taking pictures of the Florida countryside, you should probably go get it out of your system before July 1. After that date, it may be a felony.

State Senator Jim Norman (R-Tampa) recently introduced S.B. 1246, which would make it illegal to create any image of a "farm or other property where legitimate agricultural operations are being conducted" without the written consent of the owner. (I assume the "illegitimate agricultural operations" he's thinking of are marijuana farms, but maybe he's got a neighbor with some really bad landscaping.) Also, "farm" is defined to include "any tract of land cultivated for the purpose of agricultural production, the raising and breeding of domestic animals, or the storage of a commodity," which appears to mean that ranches, warehouses, and lots of other places, would be off-limits whether or not they are connected with an actual "farm" in the common sense of the word.

You'll have to be pretty careful where you point your lens in Florida if this nonsense passes. Assuming you were still inclined to visit or live in Florida at all.

Remarkably, as written the bill declares this to be a first-degree felony, which under Florida law carries a penalty of up to 30 years in prison. Fla. Stat. § 775.082(3)(b). This would make taking a picture of a farm without permission a more serious offense in Florida than manslaughter.

Normally, you would assume that something this ridiculous could only be connected with the "War on Terror," but in this case there may be an even more diabolical enemy: PETA. This article quotes Wilton Simpson, president of Simpson Farms, a legitimate agricultural operation in Norman's district, as saying the bill was needed to protect farmers' "intellectual property" and, maybe more to the point, to keep people from making undercover videos of their operations. He wouldn't say who he was concerned about, but PETA and similar groups have used this tactic from time to time. 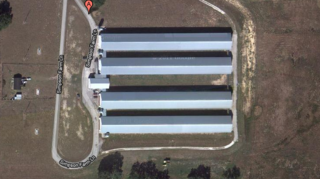 But the article also quoted Judy Dalglish, executive director of the Reporters Committee for Freedom of the Press, who noted that trespassing is already against the law, that someone who poses as a farm worker might be liable for fraud (although I think that's not clear), and that citizens have the right to take pictures as long as they aren't trespassing. She suggested the bill is unnecessary and overbroad.

Well, actually she said the bill "is just flat-out unconstitutional, not to mention stupid," so I guess she did more than suggest it.

Credit to the New York Times' Lens blog for coming up with the term "croparazzi" in connection with this bill.

Plaintiff: This Soap Did Not Attract Women as Promised