Here's another public-policy factor that Florida legislators considering a ban on saggy pants need to consider: they may offer a defense against gator attacks.

According to WKMG in Orlando, a teenager in St. Petersburg said that he was taking a shortcut home from work when he was attacked by an alligator. Luckily, though, the alligator was only able to get a mouthful of pants, and the boy was able to tear free. 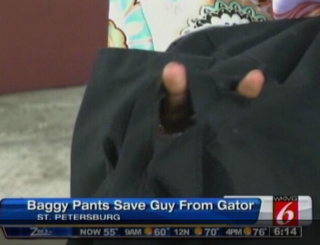 "And what did you do [then]?" a reporter asked (apparently expecting to get some answer other than "I ran"). "I ran," the boy said. "And what did the alligator do?" the intrepid reporter continued. "I don't know," the boy replied, "I didn't look back." WFTV in St. Petersburg elicited slightly different information. "It was scary, man, it was alright," WFTV quoted the teen as saying. "I don't want to say it was alright," he continued, "but it frightened me." So, in summary, attack not alright, boy frightened, ran, alligator conduct unknown.

The boy's mother gave thanks for her son's safety. "That was the advantage of wearing baggy pants that day," she opined.

The possible gator-protective effects of baggy pants are only one of the factors that legislators need to consider, though, when addressing this important issue. It's already documented that pants that are baggy enough to sag and/or be worn excessively low (which may or may not have been the case here) can hamper movement, so the potential benefits of tearaway pants could easily be outweighed by the greater risk of getting caught in the first place. At least one city council has stated that pants sagging more than three inches below the "crest of the ilium" may pose inherent health risks by causing "an improper gait." And then there is also the risk that somebody may dislike sagging pants so much that they just take a shot at the wearer. Just an example of the difficulties inherent in being a legislator in Florida.

Here's an easier, but even stupider, way to protect kids: don't let them go outside. Apparently also concerned about the welfare of children, a homeowners' association in Volusia County, Florida, has proposed a rule that would ban children from playing outdoors unless accompanied by an adult. If the rule is adopted, unsupervised playing at the Persimmon Place subdivision would result in a $100 fine. Whether the penalty would be enhanced for unsupervised playing in baggy pants remains to be seen.