The Associated Press reported this week that at least one judge of the International Criminal Court in The Hague has told lawyers appearing before her to stop wearing wigs. There is no official dress code at the ICC, and given the wide variety of legal traditions represented there, some lawyers show up bewigged and some do not. This is bothering at least one of the judges.

At the end of a hearing on something having to do with Kenya, Judge Ekaterina Trendafilova noted the inconsistent wiggery of the lawyers before her and said that in the future, wigs should not be worn by anyone. "This is not the dress code of this institution," the judge said (which is a little misleading if it doesn't have one at all). Whether she ordered the dewigging or just suggested it was not very clear. "In this quite warm weather," she continued, "maybe it will be more convenient to be without wigs." I guess that's the kind of suggestion you treat as binding, coming from a judge. 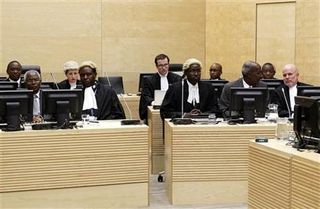 An assortment of lawyer head-coverings were on display

"I was not aware before the proceedings of any rule that there were no wigs at the ICC," insisted Steven Kay, one of the wig-wearers on Monday. He claimed that the Registry – the administrative office of the court – had told him he had the option of wearing "Dutch lawyer's garb" (and God knows what that might be) or the English wig and gown. He wigged it, only to be told by Judge Trendafilova that for consistency's sake, no one should wear wigs in the future. Kay didn't say whether he planned to appeal.

According to the AP report, a British barrister who showed up bareheaded that day might have done so in part because he once had his wig mocked by [an alleged] Serbian war criminal. David Hooper was appointed in 2006 to represent Vojislav Seselj (described by the New York Times as a "sociologist and former warlord"), who has been on trial in The Hague for years. But Seselj, who is known for his angry and insulting speeches in court, rejected Hooper, saying he wanted to represent himself. "This man with a bird's nest on his head has been falsely introduced as my counsel," Seselj said. "He will never be my defense counsel." He has not been, and he also seems to have dispensed with the nest.

In 2007, the Lord Chief Justice of Britain announced that lawyers there would no longer be required to wear wigs, at least in civil and family court. The fact that Kenyan lawyers are still wearing them suggests that wig reform has not yet spread to the rest of the former Empire.

Tip of the Day: 911 Is Not For Sandwich Complaints