In a meeting Monday night, the governing committee of Hopewell Township, New Jersey, finally passed chicken legislation it had been working on for no fewer than three years. Among other things, the measure requires the chickens to practice safe sex.

The committee's unanimous action adds Section 5-9, "Standards for Keeping Chickens," to the township's ordinances. The new section provides a variety of expected requirements, such as the size of lots on which chickens may be kept and the amount of chickens that may be kept there. (If you're wondering, it's six chickens on the first half-acre lot and four per additional half acre.) Importantly, these are just chickens we're talking about – not roosters.

Except on visitation day, and then it's time to get freaky.

Mature roosters are prohibited [too noisy]; however, roosters may visit the property for the purpose of fertilization so long as there are no more than ten (10) days of visitation per parcel in any twelve (12) month period, and no more than five (5) days consecutively.

Emphasis added. Note that the ordinance doesn't allow the roosters' owners to escort them – it's all up to the roosters. Also, I assume each rooster will be screened and interviewed by a skilled TSA agent (if any) in order to ensure that said rooster is visiting solely "for the purpose of fertilization" and isn't just there to hook up. 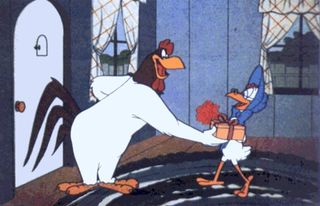 The difficulty of ensuring that may help explain the safe-sex requirement, which was added late Monday and so isn't in the draft ordinance. According to the report, committee members expressed concerns about having a bunch of roosters making these apparently unregulated booty calls, since some of them might not be disease-free. The new provision doesn't seem to require chicken condoms, but rather some form of documentation showing a clean bill of health (although as Donald Trump will insist on telling you, documentation can be faked).

The ordinance also has a special disturbing-the-peace provision:

No Disturbing the Peace. No person owning, keeping, maintaining or harboring a chicken [are some of them fugitives?] shall permit, suffer or allow a chicken to disturb the peace or quiet of the neighborhood by creating a noise across a residential property line continually for ten (10) minutes or intermittently for thirty (30) minutes, unless provoked.

Emphasis added again. I've read that several times and I'm pretty sure it says that if the person is provoked, he's entitled to retaliate by letting his chickens get loud. And considering that up to ten (10) days a year that could involve the sound of raucous chicken sex, that should be a serious deterrent.