Maybe not since Florida Sen. Gary Siplin was photographed climbing a fence trying to avoid reporters has a media strategy failed quite so badly.

Martyn Crute, a former director of UK Oil and Gas Ltd., reportedly pleaded guilty to operating a business that wasn't registered with a safety agency, and was fined and barred from acting as a director for the next seven years. This matter evidently has drawn enough publicity that Crute expected to run a gauntlet of photographers when leaving court, and so he came up with this strategy for trying to dodge them: 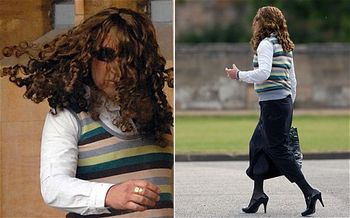 Whether he had difficulty walking in high heels or was given away by his obvious man hands and facial stubble is not clear, but according to the Daily Telegraph the "surprising disguise was noticed within seconds by the waiting photographers."

Hopefully, Mr. Crute – who reportedly now has just £20 of disposable income per week after the fines that were imposed – didn't buy the outfit just for this purpose.